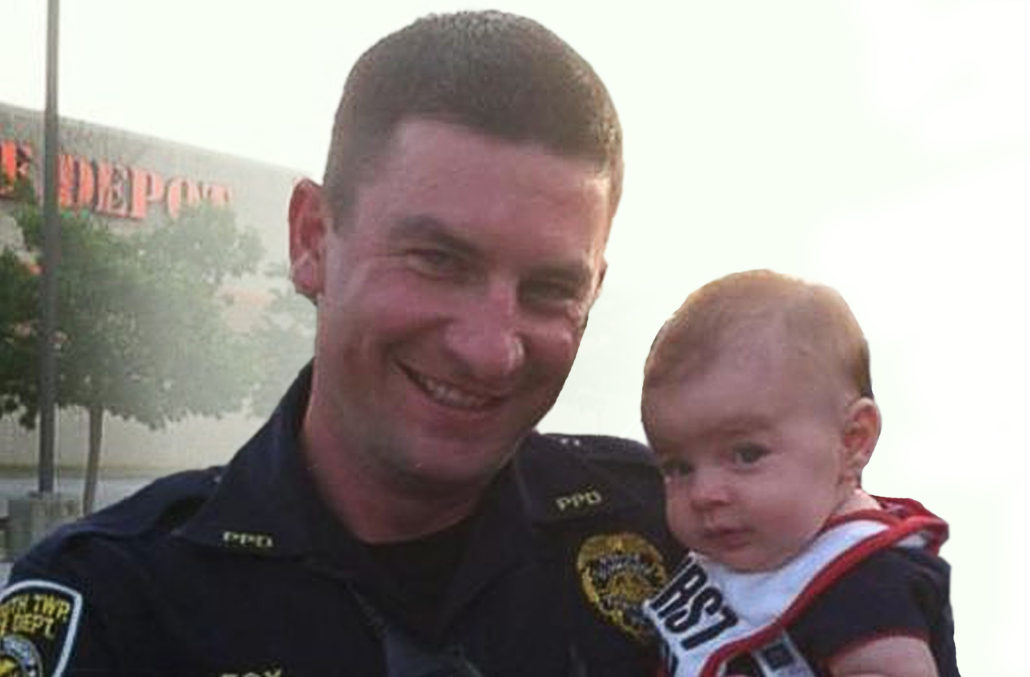 Police of Plymouth Township are searching for two women who vandalized a memorial to slain Police Officer Brad Fox. Officer Fox was only 34 years old when he was shot to death by a suspect involved in a hit and run. Fox was an officer on the force for 7 years before his tragic death in 2012.

These women are wanted in Montgomery County for vandalizing his memorial. The incident occurred on Saturday, Sept 26 at 3:24pm along a river trail where the memorial to Officer Brad Fox stands. Security footage shows two women on bicycles stop at the memorial. In the video, one of the women stands at her bike as a “lookout” while the other climbs up the side of the memorial, takes down a Thin Blue Line American flag, and then throws it into the nearby bushes, desecrating the memorial.

Plymouth Twp Police are searching for two women seen here on surveillance taking a flag from the Brad Fox Memorial and throwing it into the brush nearby. Fox was tragically killed after responding to a hit and run of Ridge Pike in 2012. @6abc pic.twitter.com/HW2SjaLbby

Brad Fox was a former Marine that served two tours of duty in Iraq was an upstanding citizen and police officer. His parents are still trying to make sense of the vandalism.

“That flag didn’t just represent Brad, that represents all police officers who protect all of us every day,” said Brad’s mother, Kathy Fox.

It’s not clear as of yet if the same women are behind the anti-police graffiti painted on the memorial benches.

“I hope they get caught, maybe they’ll realize what this means to a lot of people and not just my family, but all of these officers,” Kathy said.

This kind of behavior towards our police officers has been popping up in cities all over America since the death of George Floyed. Even just this week in the news Kentucky U.S. Attorney’s Office charged a man Sunday after he allegedly pleaded for money and offered to shoot down police officers in exchange. This man made this offer on FB live.

His name is Cortez Lamont Edwards, and he alledgedly held an AR-style pistol as he was streaming live and asking for money. He was asking for $30,000 to gun down Louisville Metro Police Department officers, and his entire plea was recorded live on social media.

Edwards was soon arrested where he sat on his couch when police executed a search warrant.

“Louisville needs healing and safety for its citizens, not armed felons seeking bids to shoot police,” U.S. Attorney Russell Coleman said in the release. “Federal law enforcement here will continue to respond as one to swiftly mitigate threats to our city.”

Edwards who is 29 years old has been charged with possession of a firearm by a convicted felon, and he can be sentenced to as many as 10 years in prison. Accoding to his release details authorities also recovered a 9mm Glock 19 handgun when they arrested Edwards. There was a toddler near the man when officers entered the home as reported by police.

Currently the investigation is being led by multiple law enforcement agencies including the Bureau of Alcohol, Tobacco, Firearms and Explosives, the Louisville Metro Police Department, Homeland Security Investigtions, the U.S. Marshal Service and teh Secret Service, as detailed in the release.