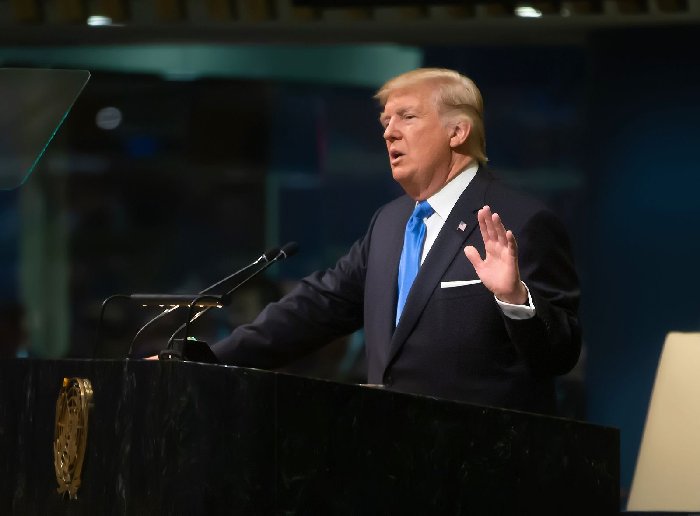 It’s beyond me how people can just keep on parroting that President Trump is racist. 49% of Democrats evidently believe that. And the leftist media is still claiming that Trump said that white supremacists at Charlottesville were “very fine people,” despite the fact that he clearly said exactly the opposite. The left considers everyone on the right racist… in fact, if you are white, you are by their definition, racist. So this brainwashed drivel keeps going on and on and is no surprise.

You might remember that Trump took a picture in 1986 with Muhammad Ali and Rosa Parks. He also won an Ellis Island award that is supposed to, “embody the spirit of America in their celebration of patriotism, tolerance, brotherhood, and diversity.” Did that satisfy the left? Nope, they have intentional selective amnesia when it comes to Trump. President Trump also donated to Sharpton’s original organization, the National Youth Movement, cut the ribbon at the 2002 conventions of Sharpton’s current group, the National Action Network, and gave rent-free space to Jessie Jackson’s Rainbow/PUSH Coalition. While I don’t agree with those actions, it sure puts the lie to him being a white supremacist. Former professional football player Herschel Walker is also a close friend of Trump’s and bluntly says he’s not a racist. Still not good enough for the left.

No president in my memory has done more for black Americans than Trump. Black unemployment was at record lows before the virus hit. Remember, more than a million black Americans voted for Trump in 2016 and the polls indicate a much larger number will vote for him this time.

Courtesy of John Hawkins, let me share with you 17 times President Trump has condemned racism, hate, white supremacism, the Alt-Right, the KKK, or David Duke:

2) “The shooter in El Paso posted a manifesto online consumed by racist hate. In one voice, our nation must condemn racism, bigotry, and white supremacy. These sinister ideologies must be defeated. Hate has no place in America. Hatred warps the mind, ravages the heart, and devours the soul. We have asked the FBI to identify all further resources they need to investigate and disrupt hate crimes and domestic terrorism – whatever they need.” – National Review, 8/06/2019

3) “The riots in Charlottesville a year ago resulted in senseless death and division,” Trump posted on Twitter Saturday morning. “We must come together as a nation. I condemn all types of racism and acts of violence. Peace to ALL Americans!” – USA Today, 8/11/2018

4) “I want to applaud the many protestors in Boston who are speaking out against bigotry and hate. Our country will soon come together as one!” – Trump Tweet, 8/19/2017

5) “We will reject bigotry and hatred and oppression in all its forms, and seek a new future built on our common culture and values as one American people.” – Washington Examiner, 6/16/2016

6) “I’m not talking about the neo-Nazis and white nationalists because they should be condemned totally.” – Trump in his famous remarks about Charlottesville, 8/15/2017

7) “Racism is evil, and those who cause violence in its name are criminals and thugs, including the KKK, neo-Nazis, white supremacists and other hate groups that are repugnant to everything we hold dear as Americans.” – NPR, 8/14/2017

8) “I don’t want to energize the (Alt-Right), and I disavow the group,” Trump told Baquet. “It’s not a group I want to energize, and if they are energized, I want to look into it and find out why.” Asked point-blank about the conference featuring (Richard) Spencer, Trump again disavowed any support. “I disavow and condemn them,” Trump told Times reporters. He did chide them for continuing to ask about the topic though, telling one questioner: “Boy, you are really into [this issue].” – Politico, 11/22/2016

9) “I don’t like any group of hate. Hate groups are not for me. How many times do I have to reject? I’ve rejected David Duke. I’ve rejected the KKK, the Ku Klux Klan, from the time I’m five-years-old.” – The Washington Examiner, 3/6/2016

12) “David Duke and all was disavowed. I disavowed him on Friday. I disavowed them right after that because I thought if there was any question and you take a look at Twitter, almost immediately after on Twitter and Facebook, they were disavowed again. I disavow him every time I speak to somebody virtually and they just keep it going.” – ABC, 3/1/2016

17) “I’ve had the chance to learn firsthand about the diversity of American culture, and it has left me with little appetite for those who hate or preach intolerance. One of our next president’s most important goals must be to induce a greater sense of tolerance for diversity.” – Donald Trump in his book, “The America We Deserve,” published 1/12/2000