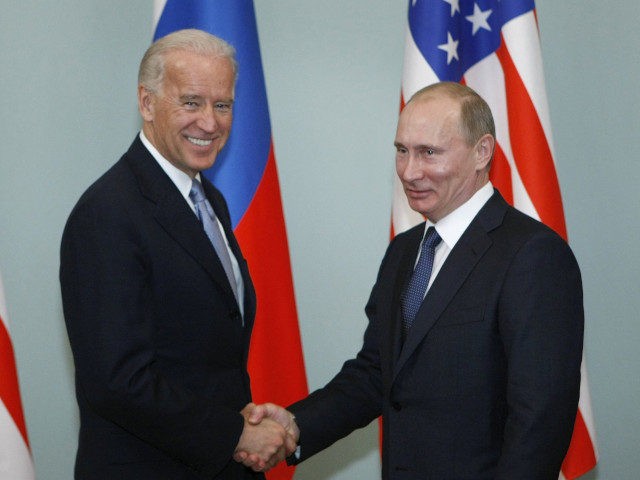 Russian President Vladimir Putin said that he would work with a Joe Biden administration, and cited common ground he shares with the Democrats over a shared embrace of Soviet ideology.

As reported by Bloomberg News:

While Putin praised President Donald Trump for improving relations, he was prepared to work with Biden if he won the U.S. election.

He cited Biden’s support for new arms reduction treaties — such as the lopsided New START under President Barack Obama.

The Russian leader even argued that the values of the Democrats were similar to those of the Soviet Communist Party, of which he said he’d been a member for 18 years. The Soviet regime’s longtime ties with the Black community in the U.S. could also be a basis for links to the Democrats, he said.

“Equality, brotherhood, what’s wrong with that?” Putin said. “There is some kind of ideological basis for establishing contacts with a representative of the Democratic Party.”

Just this Wednesday Trump and his administration declassified notes by former CIA director John Brennan. On them it indicates that he had briefed Obama about Hillary Clinton’s plans to tie Trump to Russia. At this time Clinton was the Democratic residential nominee.

Biden was also present at the Oval Office meeting in January 2017 when the investigation of then incoming National Security Advisor Michael Flynn was igniting. At this meeting possible Russian ties were discussed as the FBI had not found any evidence of any ties at that point in time.

Fast forward to today… Biden is now in a whole new mess of things.

House investigators have combined their voice with the Senate in asking the FBI to take a look into the Biden’s criminal history. Paul Sperry announced through a tweet that the House Investigators are joining the Senate in this request to get the FBI to open up a criminal investigation into the alleged foreign influenced-peddling and embezzlement that directly involves Democratic Presidential nominees Joe Biden, Biden’s younger brother and his son Hunter Biden. This request comes after suspicious financial activities were flagged by the US Treasury involving the Bidens and foreign country.

BREAKING: House investigators have now joined the Senate in requesting the FBI open a criminal investigation into possible foreign influence-peddling & embezzlement involving Joe Biden and his younger brother and son based on suspicious financial activities flagged by US Treasury

A report was unleashed last week on the Bidens, even more specifically, Hunter Biden’s actions that took place during Joe Bidens position as Vice President in the Obama administration.

“I look at Hunter Biden today, where he stole millions of dollars, stole millions,” Trump claimed. “His father should leave the campaign because his father was in on it.”

He added: “His father knew everything.”

The president was referring to an interim report released by Republicans on the Senate Homeland Security and Finance Committees on their months-long joint investigation into the younger Biden’s role on the board of Ukrainian natural gas firm Burisma Holdings, as well as his alleged “extensive and complex financial transactions.” According to the report, an investment firm co-founded by Hunter Biden, Rosemont Seneca Thornton, “received $3.5 million in a wire transfer” from Elena Baturina, the wife of the former mayor of the Russian capital.

Biden’s brother Frank is also a grifter. It runs in the family.

With Christopher Wray as Head of the FBI, this will never be investigated, but it is ready when the next FBI Director is appointed by President Trump.