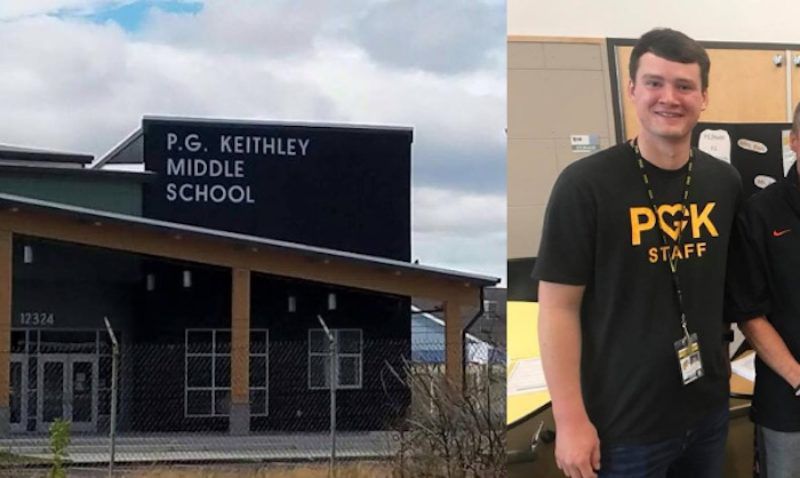 The day after President Trump’s COVID-19 diagnosis announcement a Seattle-area teacher thought it was appropriate to go on a rant about the president to his sixth graders via their zoom class time. When one of the student’s mothers complained about it the teacher responded with lies misleading her. However, the teacher did not know at the time that the mother had the entire incident recorded on her cell phone.

The teacher is Brendan Stanton who teaches at a middle school in Tacoma, Washington. The question he asked students that morning what ‘who did they admire?’. One of his students replied with ‘President Trump’. This triggered Stanton and he immediatley booted the student from the classroom chat, then proceeded to scold the child for his “inappropriate” answer.

This 10-year-old boy logged into his remote class with Stanton that day for another COVID caused online day of learning, he had no idea that he was going to be scolded for supporting his president. As usual his teacher asked a daily question “Who is the one person you admire and why?”

According to a screeshot of the boy’s answer, this is what he wrote:

“I admire Donald J. Trump because he is making American great again. And because he is the best president of the United States of America could ever, ever have. And he built the wall so terrorists couldn’t come into the U.S. Trump is the best peson in the world. And that’s why I had admire him.”

Stanton immediately to kick the boy out of the chatroom, delete the entire chat, and then as if that was not already shockingly inappropriate, he proceeded to attack the president while calling out the student for mentioning him.

The student immediatly told his mother Elsy Kusander. When Kusander came into the room to see what her son was talking about, she could already hear Stanton berating the president and singling out her son. She started to film the comments on her cell phone.

“The example that was shared in the chat, which I went ahead and erased for us, was not appropriate right? Especially as that individual has created so much division and hatred between people and specifically spoken hatred to many different individuals, OK?,” Stanton told his students.

Stanton was so triggered that he wouldn’t even say the president’s name. Instead, he referred to President Trump as “that individual” like Voldamort of Harry Potter…absolutely ridiculous.

But, that wasn’t it…he was far from done with his liberal tantrum.

“Again, that individual has spoken hate to many individuals and I don’t think is an appropriate example for a role model that we should be admiring,” Stanton concluded.

The mother was absolutely shocked at Stanton’s comments.

“I went into my son’s room and I heard the teacher saying that this individual is hateful and divisive, etc. I started to record,” Kusander told the Jason Rantz Show on KTTH. “How can a teacher be teaching to his students horrible things about the president of the country without facts?”

Eventually Kusander requested a phone call with the Stanton to discuss the incident, and he obliged to take the call later that afternoon.

Typically the digital classes are recorded and put online for students and their parents to see if needed. However, this portion of the class Stanton said he did not record, stating that it was for student privacy. Perhaps he knew that he acted out and was very unprofessional and inappropriate with the children in his 6th grade class? He maybe figured that without any evidence, no one would ever know.

Stanton told the mother that he only deleted the Trump comment because it wasn’t related to the question of the day. He insists he told the students to choose a computer programmer they admired and if they couldn’t think of one they could list someone from the community.

“Donald Trump would not fit that prompt … just because it was a little bit off topic,” Stanton told Kusander according to an audio recording of the conversation shared with the Jason Rantz Show on KTTH.

Kusander told Stanton she was recording the conversation at the start of the call.

Someone else’s fault!
Stanton then claims another student was offended by Kusander’s answer, and that’s why he deleted it. He assured the mother that it had nothing to do with his own political positions.

“My perspective has nothing to do with Donald Trump himself, right? I try to keep politics out of the classroom,” he explained.

When Kusander questions his recap, Stanton again assured her it wasn’t political at all.

“I do try to keep politics out of the classroom … because students have different opinions, right?,” he said. “And so if the way that I said it was not perfect, I do apologize. What I was trying to say is just, ‘Hey, hey, guys, let’s get it back to our topic of the day because we really need to get moving into our content, which was on our computer scientists.’”

But even in this call, Stanton pushed his political position. He said he was offended by her son’s claim that the border wall keeps out terrorists.

“But we know that our neighbors at the southern border are not all terrorists, right?,” he noted.

The student neither said southern neighbors are terrorists nor implied it.

Kusander pointed out that she emigrated to the United States from Honduras. Stanton told her, “So you would understand.” Not quite. She went on to explain why she’s against illegal immigration, despite Stanton assuming she’d agree with him.

At this point Kusander revealed to Stanton that she had witnessed the attack on her son and then Staton’s story started to change….

“I came into the room, and you were talking, I got my phone and I recorded part of your conversation,” she revealed before doubling down. “I clearly saw and recorded what you were saying …”

Suddenly, the apolitical Stanton who would never bring his political opinion into the classroom, was a little more honest about what transpired.

“I do apologize if my words were not perfect at the time,” he told her. “If I used … if I said that Trump was ‘hateful and divisive,’ that may have been what I used at the time, but my purpose was in bringing us back to the conversation of computer scientists and the positive role that they’ve played in our history.”

He again offered to apologize to her son.

“I totally respect him as an individual. And his opinion. I am always interested in student feedback and also parent feedback as well. So I appreciate you having this conversation with me,” Stanton said.

What do you think? Sound off in the comment section below!