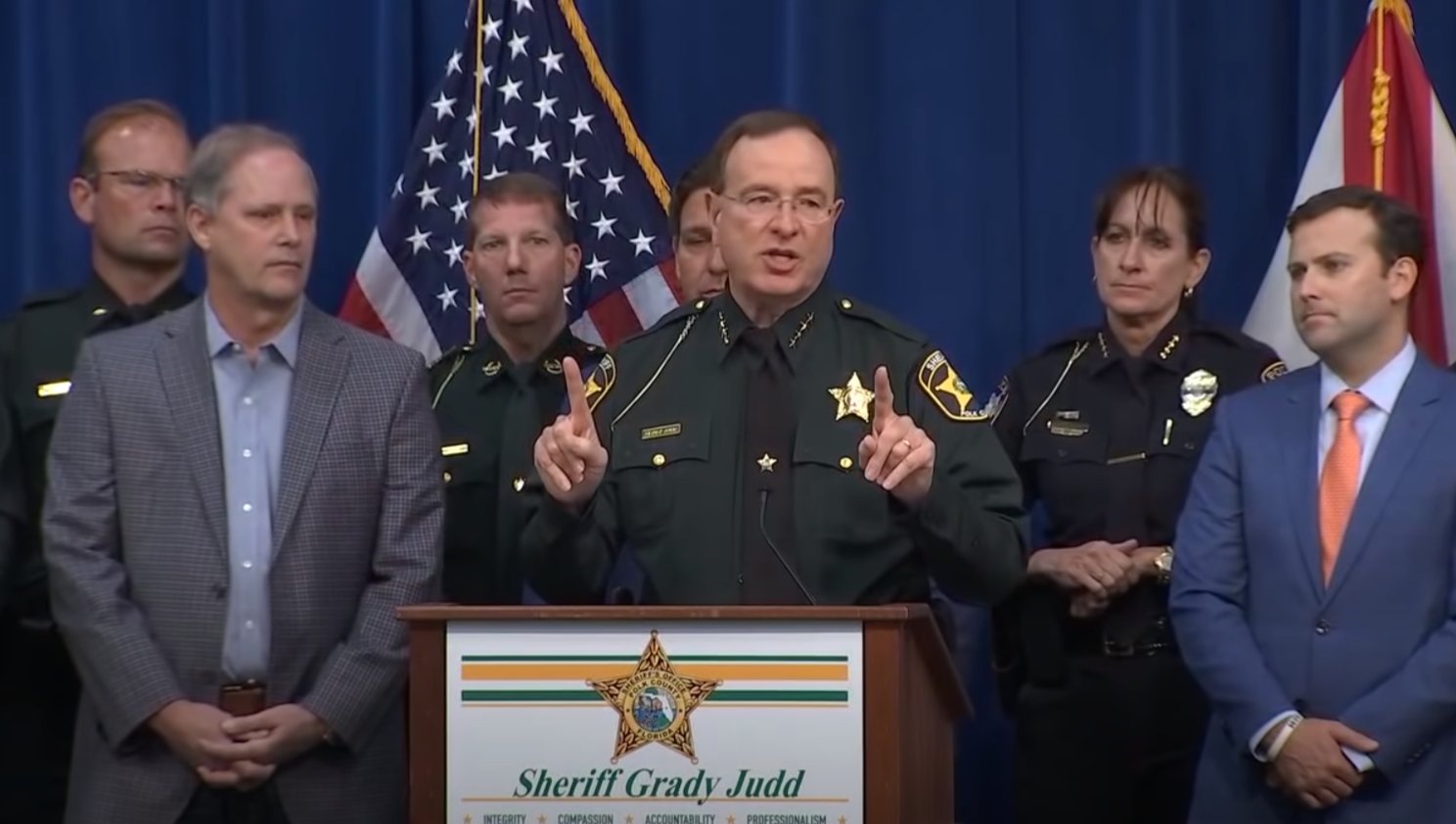 Polk County, Florida Sheriff Grady Judd pulled no punches when he laid out the difference between peaceful protests and illegal acts of violence and anarchy. He used a series of photographs to jokingly explain which was which to reporters. Sheriff Judd did this as a show of support for Gov. Ron DeSantis’ new legislative proposal that would impose harsh new penalties on rioters and looters.

“I can tell you, folks, so that there’s no misunderstanding today. This is a peaceful protest,” Judd stated while brandishing a photo of people marching with signs.

“In the event you didn’t get that, let me show you something,” he went on. Judd proceeded to present two more photos. One showed an actual demonstration and the other displayed a looter carting off items he stole from a store.

“This is a peaceful protest. This is looting,” Judd emphasized. “If you loot, the next thing you can try to steal is something off of your food tray at the county jail. ‘Cause you’re going to jail. That’s a guarantee. And we’re gonna enjoy taking you down there.”

Next, he showed a third set of photos. This time the contrast was between a peaceful protest and someone who was trying to damage a vehicle.

“Some people are slow learners,” he quipped while DeSantis laughed.

“This is a peaceful protest, this is violence,” Judd said. “It’s not acceptable.”

Riots and looting have been all over the news for the last few months. They have taken place in many cities and rioters protest what they call racial injustice and police brutality when in fact what they are doing is stirring up a color revolution to try and tear down our form of government. It started in Minneapolis following the George Floyd incident and you had so-called reporters such as MSNBC’s Ali Velshi who went on TV and had the nerve to call the riots ‘mostly peaceful’ and stated the rioters had not been “unruly” as fires raged behind him that were set by those same rioters. He was mocked and ridiculed for it but it did not change the propaganda coming out of MSNBC.

MSNBC reporter just now: "I want to be clear on how I characterize this. This is mostly a protest. It is not generally speaking unruly."

The guy is literally standing in front of a burning building in the middle of a riot. pic.twitter.com/IzCV6On4sF

Property was destroyed and fires burned throughout the city. The Minneapolis Police Department’s Third Precinct building was evacuated and set ablaze.

“For most of the day, today, it looked a lot calmer than yesterday looked,” Velshi unbelievably informed anchor Brian Williams even though Gov. Tim Walz (D) had activated National Guard units.

“I want to be clear on how I characterize this,” Velshi said. “This is mostly a protest.” All evidence to the contrary.

Then in August as fires again raged in Kenosha, WI after the police-involved shooting of Jacob Blake, a live CNN shot of the chaos included a chyron that said, “Fiery But Mostly Peaceful Protests After Police Shooting.” What we saw and what we heard were two entirely different things here. It made no sense.

Sheriff Judd made it abundantly clear that there is a difference between protesting and rioting. “I truly believe in our God-given right and our constitutional right to speak openly and freely to address our government. That’s important. We listen every day,” he said. “But I’ve also watched across this country when law enforcement officers who put their lives on the line were told to stand down. Allow ‘em to burn the precinct. Allow ‘em to rob and loot,” Judd stated while praising DeSantis and Florida’s legislative leaders for “just being here… and saying that you support us.”

DeSantis added, “I look at what goes on in Portland. They’ll have people, they’ll arrest them. They’re all scraggly-looking ANTIFA-types. They get their mugshot taken, then they get released. It’s like a carousel; on and on it goes. That’s not going to happen in here in Florida.”

Someone should get that memo to Wisconsin and other states where this insanity is going down and for Pete’s sake, turn off the lying propaganda coming out of the leftist media.