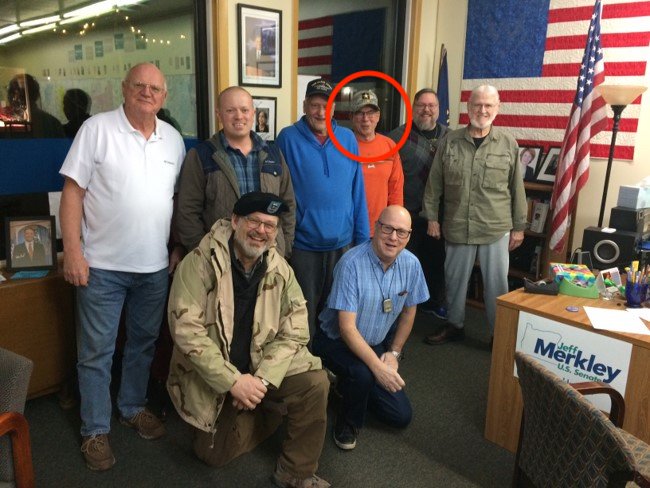 There are some real loons on the left that are absolutey losing their sense of reality…along with their commonsense and human decency. The Oregon Women For Trump Organization tried to have a pro-Trump event on Sunday, October 4th. They could have NEVER predicted what was going to happen that day. Their event was horribly interrupted by a knife wielding crazy Democrat who was literally threatening them in broad daylight, and worse, acted as if he was doing the right thing!

The crazy Democrat has since been identified as Clayton John Callahan. It has also been discovered that Mr. Callahan is in fact the communications director for the Democratic Party of Washington County.

He isn’t some crazy man who was off his meds and committed this crime due to mental illness. He is actually a professional, and someone in leadership within the Democratic Party.

OWFT had a Trump Convoy today in Portland. We were approached and threatened by a knife weilding democrat leader from Washington Co. Democrat party! @MrAndyNgo @TuckerCarlson @realDonaldTrump @PatriotPrayerUS pic.twitter.com/ZysOBPL8S6

The altercation was all caught on video, the evidence is crystal clear, and Callahan was immediately booked into jail on the charges of Unlawful Use Of A Weapon. Do you think Callahan woke up that morning with the intention of pulling a knife on innocent people because they believed differently politically? I would guess not, but why in the world did he have access to a knife in that very moment??

Joey Gibson, of Patriot Prayer, breaks down the incident and gives us some of the backstory on our new friend:

Callahan has written blog posts for the Washington County Democrats, his focus was mostly set on encouraging military veteran involvement.

Victoria Taft, of PJ Media, sums it up:

Pulling a knife on people because you hate their political beliefs is a hate crime.
When the knife-wielder is the Comms Director for @WashCoDems as part of the @ORDems, Clayton John Callahan, it should be a cause for firing, prosecution & prison@RealOWFT @realDonaldTrump pic.twitter.com/TlXs1mob1j

Democrats are seemingly becoming more unstable…there are so many reporting of similar incidents. For example…

Thirty-three year old man, Alvin Gary Shaw from California has been arrested for allegedly attacking several people including an 84-yr old woman in attendance at a MAGA rally. He confronted a group of people at the rally that was held in Aliso Viejo around 6:30pm.

Allegedly Shaw blew cigar smoke into the faces of some of the attendees’ faces and then took his cigar and proceeded to burn another person’s Trump sign. From there things only esculated, when he punched two people and knocked a third person to the ground.

The rally was a smaller one, with 20 to 30 people gathered to support Trump. They were wearing their ‘Make America Great Again’ hats and were proudly carrying their ‘Trump-Pence’ signs and ‘Trump-Keep America Great 2020’.

It was a peaceful gathering of Trump supporters, videos show the supporters cheering as cars drove by, laughing and having a good time. This was until Shaw approached them. Cynthia Cantrelle-Westman reported to authorities when she first saw Shaw approaching, she had assumed he was coming to join them in the rally.

‘Instead, he was pretty upset and he started using profanity from the minute he arrived,’ she said.

‘He kept coming over to me and getting in my face, and all I could say was the F-word.’

The altercation between Shaw and rally attendees took a turn for the worst when Shaw start swinging at three people ages 55,74, and previously mentioned 84-yr old Donna Snow.

‘He took his hand way back like he was going to punch me, and [he] hit me right across the face,’ Snow, told CBS Los Angeles.

‘Broke my earrings off.’

One of the victims had to be treated at the local hospital for a neck injury. At the time of the assault Shaw pulled out a small pocket knife. This is when a retired police officer arrived on scene and Shaw found himself at gun point. He tried to run, but was wrestled down to the ground before he could cause anymore trouble.

He has been arrested on several charges including, elder abuse, assault with a deadly weapon, and assault and bettery.

‘This could have been a very serious incident,’ Sgt Dennis Breckner told CBS Los Angeles.

‘In this case, this was just two groups that disagree, and while we support people and their using their First Amendment rights to put out their message, we prefer that that remain peaceful.’

Cynthia Cantrell-Westman in a facebook post shared that she wanted to speak out openly of the incident that started out beautiful but quickly took a turn for the worst because of one individual.

‘Fear and faith cannot live in the same house.’ she wrote
‘We will go on with God at the helm in the face of adversity. Thank you Law Enforcement for keeping us safe. We know what you face each day and will pray for our enemies.’