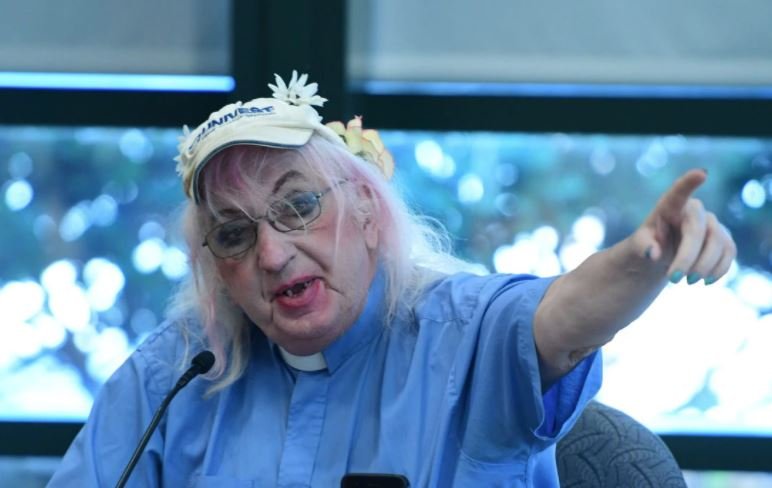 Charges have now been filed against the election judge in Allentown’s 3rd ward. The Judge’s name is Everett “Erika” Bickford and he was charged with two election code violations including prying into ballots. So shady… these corrupt are, aren’t they?

Lehigh County District Attorney Jim Martin on Monday announced charges against an elections judge in Allentown’s 3rd Ward who was accused of tampering with ballots during the Democratic primary race for state representative between Enid Santiago and Peter Schweyer.

Everett “Erika” Bickford was charged with two election code violations: insertion and alteration of entries in documents, and prying into ballots, both misdemeanors.

Allentown, in Lehigh County in Pennsylvania is the focus of the song from Billy Joel in 1982, “Allentown“. The song was about the unemployed steel workers in the area. It looks like the city has changed over time.

During an interview with detectives, Bickford said she did not alter any ballots or change the voter’s choices, but admitted darkening some bubbles they chose, Martin said in a news release. She estimated that she darkened voters’ bubbles about 30 times, Martin said. Bickford also said she “trimmed” ballots’ jagged edges so the machine would accept them.

Bickford was not charged with altering or changing votes to favor either Schweyer or Santiago, who were vying for the Democratic nomination for the Pennsylvania General Assembly’s 22nd District.

There have been stories of voter/ballot fraud coming in from everywhere!

I love how the left claims there is never any voter fraud unless of course, it’s their candidate in doubt. In just one of many, many incidents like it, over 1,000 Virginia voters who sought an absentee ballot to vote received an additional ballot in the mail, raising further concerns about possible electoral fraud in the November election. Well, duh. In Pennsylvania, they found ballots in a ditch and the ones for Trump were open. The list of these occurrences is incredibly long already and the real voting hasn’t even started.

Fox News is now reporting that officials are blaming the confusion on label printing machines that jammed, erroneously causing some to be duplicated when entire pages were reprinted due to damage to just some of the labels. “Before the supervisors caught it, the people applying the labels applied them to the entire sheet of labels rather than just pulling out the ones that should have been processed,” Fairfax County Registrar Gary Scott told NBC 4 Washington. Cue the blame for the Postal Service up next.

Fairfax got the most duplicate ballots, receiving roughly 1,000 out of the reported 1,400 across the state. Another 300 were sent to voters in the city of Richmond and 100 to Henrico County.

“We knew the Democrats’ many last-minute changes to our election law would make our elections less secure, but no one could imagine voters receiving two ballots,” Virginia Republican Party chairman Rich Anderson said in a statement. Yes, we could and did.

There is also a lot of voter confusion across Northern Virginia about whether a witness must sign the mail-in ballot. Even though the signature line is still on the ballot envelope, a court ruled because of COVID-19 concerns, it is not required this year. Written instructions tell voters that if they do not feel safe getting a witness, they can submit the ballot without one and it will not be held against them.

If voters are worried about sending ballots back in the mail, they can go to the Fairfax County Government Center and put them in a dropbox. The possibilities for voter fraud are endless here. Fairfax County will be adding 14 other dropbox locations in mid-October, and the boxes will be staffed at all times. Sure they will and I’m sure they are all fine, upstanding non-partisan watchers. Color me exceedingly doubtful.

In Greenville, Wisconsin, U.S. Postal Service officials are looking into trays of mail that were found in another ditch. In a statement, the Outagamie County Sheriff’s Office said the three trays were found at 8 a.m. near the Appleton International Airport. A USPS spokesman confirmed to FOX 11 that the mail included absentee ballots. I detect a fraudulent trend here.

All of this is occurring after a Democratic push to expand absentee voting in a bid to reduce the spread of the Coronavirus. As a result, absentee ballots no longer require an excuse, and any registered voter is allowed to request one. It’s that other way of trying to steal an election by Democrats.

While mail-in and absentee voting has surged to record highs this year due to the COVID-19 pandemic, President Trump has repeatedly argued it would lead to “voter fraud.” Democrats have countered by accusing the president and the GOP of trying to suppress the vote. Looks like Trump is being proven right once again. Vote in person in November — it’s the most important election in our lifetime and our future depends on it.