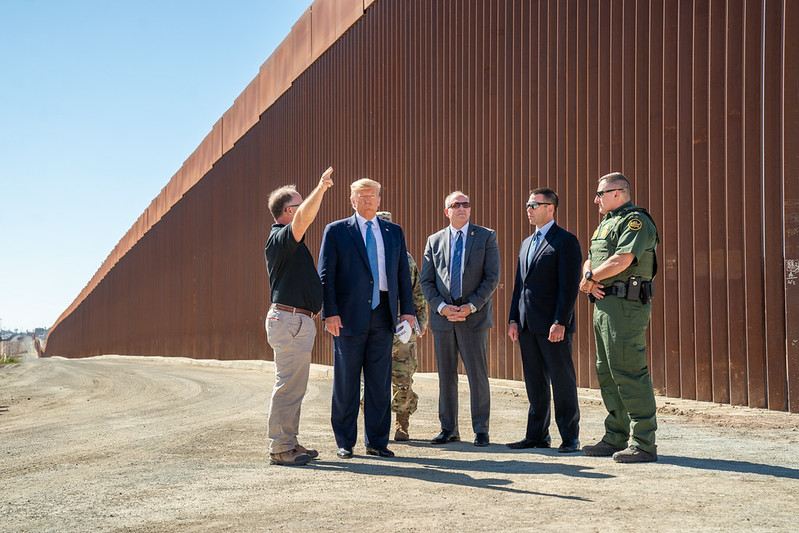 “Construction is moving at a rate of approximately ten miles per week, setting the administration up to complete its year-end goal with time to spare,” said the September 29 statement, which said that 738 miles had been built, are under construction, or are being planned:

This 450-mile section of constructed wall is significant as it will mark the end of DHS’s first round of efforts to secure the SWB with physical borders. These are some of the highest-trafficking and therefore most critical sectors of the southern border for illegal crossings and apprehensions.

These numbers point to the department’s unrelenting efforts to secure the American people and restore integrity to America’s broken immigration system despite widespread, transparently political obstruction in both Congress and the courts over the course of the administration.

Finally, as hundreds of new miles of border wall system have been constructed, they have pushed cartels to traffic their poisonous products precisely where DHS (Department of Homeland Security) is best equipped — our Ports of Entry. The drugs we are seizing as a result of this new wall that never enter and devastate our communities, and never line the pockets of cartels.”

BREAKING: #BorderWall construction has reached Quitobaquito Springs. This week the @NatlParkService closed all public access to the area to suppress Indigenous-led protests & stop the media from documenting the horrific destruction of this sacred site.

As reported by the Washington Post, Trump’s $15 billion project is being built around-the-clock:

Crews have been working 24 hours a day, seven days a week, on at least five locations on the border, according to officials overseeing the project who spoke on the condition of anonymity because they were not authorized to comment publicly.

The rapid pace of construction has proven to make a big impact on Arizona, in areas where the U.S. government has hastened the project by building through protected areas and federal lands. These are the areas where the administration is able to bypass environmental laws, and archaeological reviews.

Its reported that the wall’s progress is slower in the Rio Grande Valley of South Texas which happens to be the area where illegal crossings are the greatest and the region that CBP has identified as its first priority for barrier construction.

Almost all the land that the government is seeking to build the wall is on private land.

It almost feels like all the RECENT former Presidents should hang their heads in shame. Trump is making them look like amateurs…but then again, they may have been in it for the power and money and not for you and me.

According To Benjamin Franklin, Americans Are Losing Big Time! Who Would Know Better Then Him? (Video)
January 28th, 2022 Sons of Liberty Media