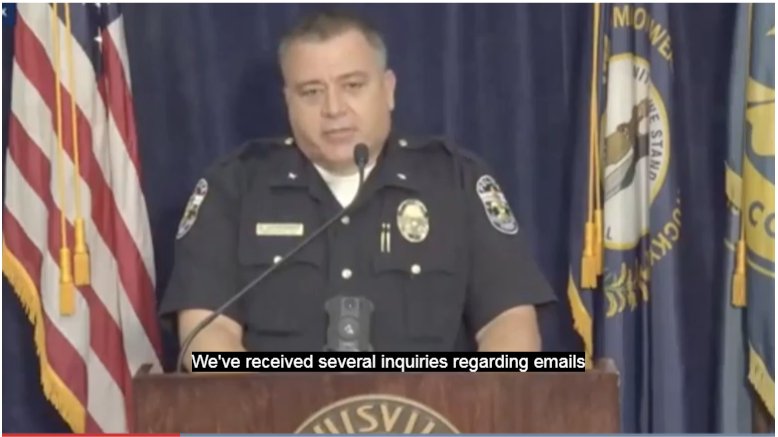 Maj. Bridget Hallahan who was the Kentucky police major who wrote a so-called disparaging email on Black Lives Matter protesters by calling them “punks” who will be living in their parents’ basements all their lives, has now been officially relieved of her duties.

Her last day with the Louisville Metro Police Department will be Oct. 1st. She will then retire according to LMPD interim Chief Robert Schroeder. This was revealed during a press briefing today as reported by the Courier-Journal.

“We are aware of these emails and we have been looking into them,” Schroeder said, adding, “They were her personal opinions and do not represent the views of this department.” But her opinion was evidently enough to get her fired. It was certainly poor judgment but did it really rise to the level of termination?

The email was written in August and in it she said she knew it was difficult for her colleagues to keep their opinions to themselves, “especially when we, as a whole or as an individual, become the target of people in the public who criticize what we do without even knowing the facts.”

“These ANTIFA and BLM people, especially the ones who just jumped on the bandwagon ‘yesterday’ because they became ‘woke’ (insert eye roll here), do not deserve a second glance or thought from us. Our little pinky toenails have more character, morals, and ethics, than these punks have in their entire body,” she wrote in her email.

“Do not stop to their level. Do not respond to them. If we do, we only validate what they did. Don’t make them important, because they are not. They will be the ones washing our cars, cashing us out at the Walmart, or living in their parents’ basement playing COD [‘Call of Duty’] for their entire life.”

Frankly, I see nothing wrong with the email. Again, I suppose she should not have voiced her personal opinion at work but it’s hard to see how this should get anyone fired. After all, it’s the truth.

All of this was brought on by an incident where three officers served a search warrant (not a no-knock one) at three in the morning on March 13th. Breonna Taylor’s boyfriend refused to open the door when the police identified themselves. The police came in and the boyfriend shot the officer in the leg. The police then returned fire. The one officer who shot through a window was the one who has been reprimanded. Taylor’s death was a tragic accident but it was not murder or police brutality. It certainly was not racial injustice which is what is being protested in the streets there.

Hallahan’s email encouraged her fellow officers to come to her office to “vent together,” if need be. Again, I see nothing wrong with that.

“There is currently no recourse we have for incidents involving the doxing of officers or their families,” she wrote. And she is correct.

“What we can do is speak up against them and put the truth out there. Through the PIO office and the LMPD FB page, we will come back at them on their own page to let them and everyone else know they are lying. We will print the facts. I will see to it.” The media lied for months about this incident and they are still running with it.

The email went on to state, “We have already taken care of one incident. I hope we never have to do it again. Just know I got your back.”

Hallahan was appointed commander of the Fifth Division last July, according to the Courier-Journal. I believe she showed leadership in this incident but instead, it ended her career. That’s just sad and there’s no justice to be found here anywhere at all.

Canadian actress suffers from Bells Palsy after taking COVID jab, but says she would “do it again” because “it’s what we have to do”
October 3rd, 2022 DC Dirty Laundry