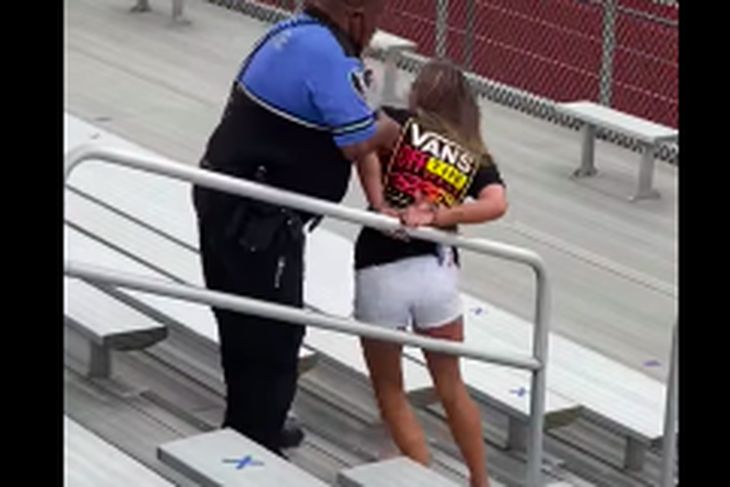 The video you are about to watch here might shock you. Alecia Kitts of Logan, Ohio was at a football game to watch her son play. The footage shows her sitting with her family, practicing social distancing from other families that were in attendance there that day, but she was there without a mask.

It was an outside game of football, and she was social distancing. However, a police officer approached her and told her that she was being detained. She resisted and after some struggle she was tased into submission in front of children.

Alecia Kitts traveled to see her son play football in Logan, Ohio. Footage shows her seated with her family at the proper social distance from other families without a mask on. A police officer approached her and arrested her.

According to Tiffany Kennedy, the woman who shot the above video, Kitts had not been warned for not wearing a mask prior to the officer approaching her. Kennedy also said that Kitts has asthma and that’s why she was not wearing a mask.

“There is no reason to tase someone and arrest them for not wearing a mask,” Kennedy said.

Kennedy also pointed out the female officer who is shown running toward the Logan officer and Kitts at the end of the video was not wearing a mask – pulling one out of her pocket as she was in pursuit.

“Alecia’s mom said that when the officer tased her, the current went through the bleachers and zapped the kid sitting there too.”

Kitts appears to be socially distanced from others in the crowd and sitting with her family. “There were only 25 or 30 fans from our town on our side,” said Kennedy.

Ohio has a mask mandate, but masks are only required indoors or when you cannot socially distance. The school may have had its own set of rules in place, at this time it is unclear whether being arrested is following policy or not.

There is also the issue of resisting arrest. That never works out well for anyone, and her children didn’t need to see what played because she resisted.

This whole situation is a pandora’s box. For now all we know is what you see on the video, the details of the incident have not yet been confirmed. We all know there is always another side to the story.

Still, to be arrested over not having a mask on during an outdoor football game while you are practicing social distancing is rather strange. You can be the judge of what you see.

Remember when Democratic Presidential candidate Joe Biden thought he could order a national mask mandate? For some reason watching this video made me think that this is what it would look like.

Do you think there maybe more to the story than what meets the eye here?

Let us know your thoughts on this in the comment section down below!