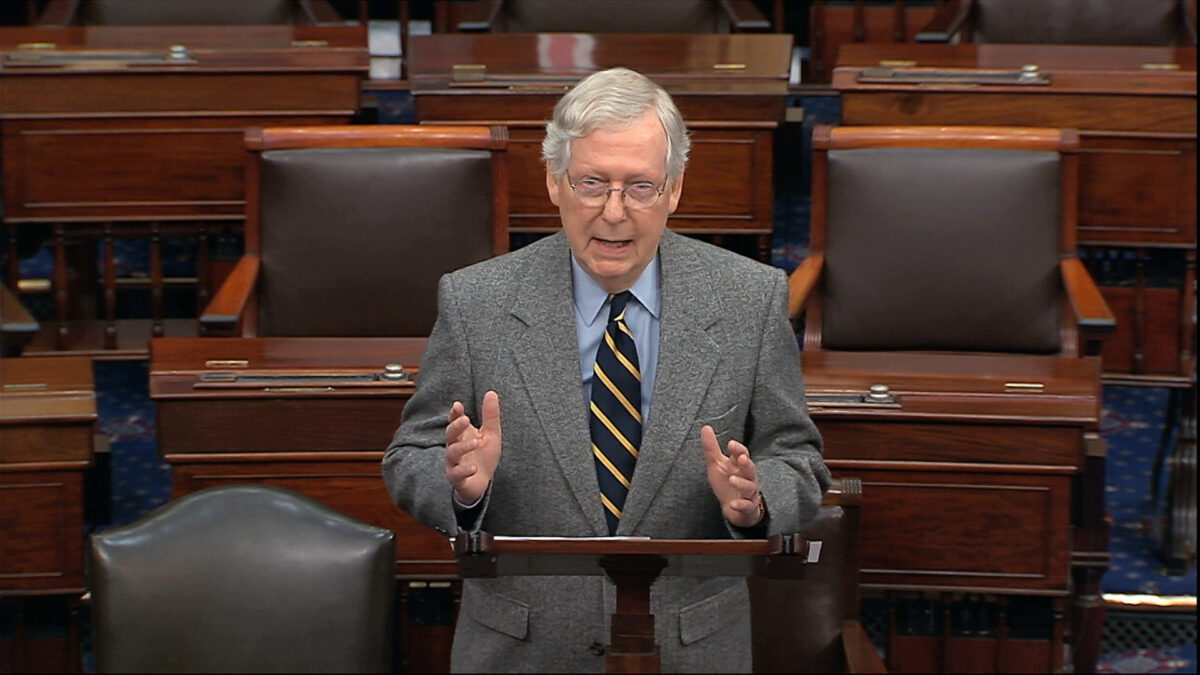 Senator Majority Leader Mitch McConnell is calling out Democrats for using scare tactics against Americans to get their way. Democrats have come out and said that if Judge Amy Coney Barrett were to be confirmed that she would move to destroy healthcare for those that have pre-existing conditions, as part of the Affordable Care Act.

We have watched as Democrats have thrown everything they could at President Trump’s nominee for the Supreme Court, even stating that she would strike down the Affordable Care Act. Many Senate Democrats have announced that they will not meet with judge Barrett, including Senate Minority Leader Chuck Schumer, and Senators Richard Bluementhal, Maize Hirono, and Elizabeth Warren, stating that among other things the main reason is her position on the Affordable Care Act.

On September 29 Senate Minority Leader Chuck Schumer posted this to his Twitter account stating the reason why he would not be meeting with Trump’s Supreme Court nominee.

“I am not going to meet with Judge Barrett. Why would I meet with a nominee of such an illegitimate process and one who is determined to get rid of the Affordable Care Act?”

“The Democratic leader says, quote: ‘It’s not her qualifications.’ …Certainly, every senator may define advise, and consent how they wish, but I think it’s telling to see Senate Democrats openly affirming that judge Barrett’s actual and judicial qualifications do not matter to them,” said McConnell from the Senate floor just this Wednesday.

He said that Democrats “see the court as an unelected super-legislature” and that judges are there to “dictate policy outcomes, rather than following the facts and text, wherever they lead.”

At her recent nomination ceremony Barrett said that if she were confirmed:

“I would discharge the judicial oath, which requires me to administer justice without respect to persons, do equal right to the poor and rich, and faithfully and impartially discharge my duties under the United States Constitution.”

McConnell is warning Americans about Democrats using their “scare tactics” on the public.

“That’s why we’ve gotten the same scare tactics for almost half a century- John Paul Stevens was going to end women’s rights. David Souter was going to send vulnurable people into the Dark Ages. John Roberts was going to declare war on health insurance,”

“And now our Democratic colleagues want Americans to believe that judge Barrett is on a one-woman crusade to hurt Americans with pre-existing conditions,”

“Make no mistake: A vote by any Senator for Judge Amy Coney Barrett is a vote to strike down the Affordable Care Act and eliminate protections for millions of Americans with pre-existing conditions.”

House Speaker Nancy Pelosi has made a claim that Barrett’s “nomination threatens the destruction of life-saving protections for 135 million Americans with pre-existing conditions together with every other benefit and protection of the Affordable Care Act.”

Senator Jeff Merkley joined the bandwagon and criticized Barrett as the nominee that will allow the Supreme Court to strike down the ACA.

“Republican senators are working extra hard to take away pre-existing condition coverage. As they rush forward with an anti-ACA nominee, they also voted today to make sure the ACA lawsuit continues. Insurance company executive must be thrilled.”

McConnell is calling Democrats out for their “totally predictable and totally dishonest” comments.

“These baseless attacks over healthcare are supposedly founded on a technical argument and a four-year-old scholarly article. Then-Professor Barrett analyzed the Supreme Court’s ruling on one piece-of Obamacare: the unfair, unpopular individual mandate penalty.”

He shared how this on piece of the ACA was “zeroed out” by Republicans in Congress three years ago. “The Constitutional arguments over whether that terrible idea was a penalty or a tax are now moot.”

“Working Americans are no longer penlized by that Democrat policy; Americans with pre-existing conditions are still protected,”