That’s what the head of the Minneapolis Police Department’s 3rd Precinct said in an email to a business owner who shared that his employees are scared to go to work. MN 3rd has turned into a modern day Gotham. With story after story of shop owners who are being terrorized by a recent skyrocket in crime sprees as BLM/ANTIFA groups demands defunding the police making criminals now emboldened to do wrong. Police are fleeing the precinct. Citizens can’t get help from the shrinking police department. 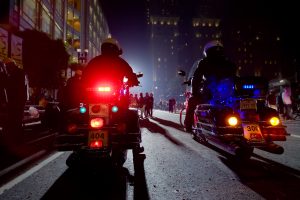 Here are just a few of their stories:

*Surveillance video shows a group accused of robbing Chad Stamps’ wife inside her gift shop, 14 Hill, during the lunch hour earlier this month.

“So they stole our car, stole our wallet, checkbook, everything,” Stamps said.

Stamps says one of the suspects punched someone trying to help her.

“It does erode the confidence in the neighborhood of the people and being able to feel safe coming down here,” Stamps said.

The Stamps store was hit a year ago, too. They say they’re not going anywhere, but lawlessness can’t continue.

“Nothing changed before and nothing’s changed now, except that these criminals have gotten more emboldened about doing this,” Stamps said.

*Anywhere time, someone opened fire inside the Pizza Hut. The employee who was there has now quit. And a car flying down the street crashed into a bus stop and business.

*Pedego Electric Bikes has now added a lock and doorbell after being broken into.

“To say it doesn’t make you a little bit nervous, of course it does. And nobody wants a gun drawn on them. It’s always in the back of your mind,” Paulson said.

*Russell Hrubesky lives and works nearby.

“I’m scared for my coworkers, but it’s worrisome to see people that I care about just kind of in a dangerous area,” Hrubesky said.

*A nearby business relayed a similar message to the inspector of the 3rd Precinct via email. They also sharing it’s hard to find employees who want to work in the area, and they are asking for a long-term plan.

*Here is the response they received from Inspector Sean McGinty:

As far as a long-term plan I don’t have one. I have lost 30% of my street officers since the end of May. Budget cuts from COVID-19 and an additional 1.5 million from the council in August we have let go 17 CSO’s and cancelled a recruit class of 29. A potential Cadet class slated for January of 2021 was also eliminated. It takes about a year to get a police Officer onto the streets with hiring, backgrounds and field training so reinforcements aren’t coming anytime soon. We are doing everything we can with what we have. I hate to see great businesses like yours and the rest of your corridor being victimized and feeling unsafe. Please let me know if you have any more questions.

The Inspector gave an excellent summary. I think the only plan city leadership has is to further decimate its police department. Businesses and people will continue to flee the city. And rightfully so.

The Minneapolis Police Department currently has a budget of more than $180,000,000. Chief Arradondo reassured the City Council and the public this week that MPD is fully staffed in terms of patrols. The inspector’s stated lack of a plan is frustrating given the severity of safety concerns and the fact that MPD today has one of the largest budgets of any City department.

I am deeply disturbed by the increase in violent break-in and robberies specifically in this area near 48th and Chicago, and throughout the city. Small business is the lifeblood of this community and we cannot afford to allow them to continue to suffer these losses. Inspector McGinty and his staff have made some arrests in these incidents, and will continue to do their jobs with the resources that have on hand, but we know that preventing crime has to be a part of our Continuum of Public Safety as well. That means more investments in job training and opportunities, access to safe and affordable housing and other measures to steer young people towards positive pursuits.