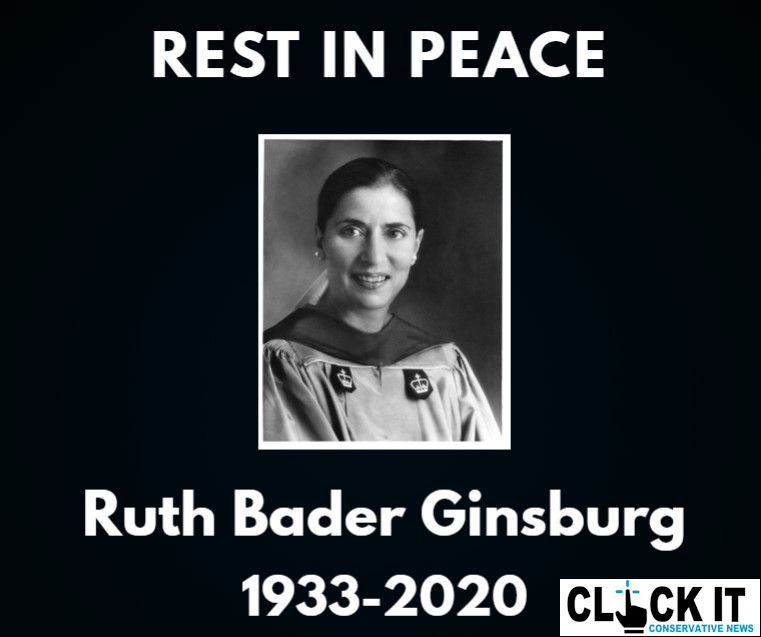 Earlier tonight, Supreme Court Justice Ruth Bader Ginsburg passed away because of complications related to metastatic pancreas cancer. Ginsburg has been a reliable liberal vote on the court since she was appointed by Bill Clinton in 1993 and has often been ill in recent years.

Naturally, a Supreme Court Appointment this close to an election would be controversial, especially in light of McConnell choosing to hold up the Merrick Garland appointment in the last year of Barrack Obama’s presidency. Additionally, liberals have already been discussing expanding the number of judges if they take over the Senate as part of an effort to stack the Supreme Court. Although it’s impossible to say whether that effort would succeed, it would certainly be under serious consideration if Democrats took over.

Appointing a replacement for Ginsburg this close to the election would certainly outrage the Left making that more likely if Democrats took over, but on the other hand, those same Democrats certainly wouldn’t hesitate to appoint a Supreme Court Justice themselves in a similar situation.

It’s also worth considering that if the Ruth Bader Ginsburg seat was up for grabs based on who wins the election, it would be something that would motivate more people to vote. Probably on both sides though.

Trending: Republicans in the House & Senate ask FBI to Investigate Joe Biden, His Son Hunter and His Brother

On top of all that, it is worrisome that we have a presidential election coming up that could very well be controversial and we could only have 8 Supreme Court members. That could lead to an election deciding decision coming up and a 4-4 deadlock.

So, although it seems gross and a little improper to be discussing this kind of thing only hours after Ginsburg’s death, the real question is what are Republicans going to do now? There’s no word from Trump yet, but Mitch McConnell seems to expect to be pushing through a nominee.

The Senate and the nation mourn the passing of Justice Ruth Bader Ginsburg and the conclusion of her extraordinary American life.

His task would not be very difficult given that there are only 53 Republican Senators and Senate Judiciary Committee Chairman Chuck Grassley has previously said his committee would not consider replacing a candidate in 2020. Lisa Murkowski already said Friday she would not vote to fill a seat this close to an election. Susan Collins is losing in Maine. Unless she believes she can’t win, it’s hard to see her voting for a replacement. Then, there’s Mitt Romney who is likely “no” vote as well. Would any other Republican Senators be a tough sell? That is entirely possible. So, they would need to hold every vote AND turn around likely “no” votes to get a Republican though. That is a tall order.

What that probably means is that Senate Republicans can’t get enough votes to push through a replacement justice for Ginsburg before the election, so that option is probably going to be off the table by default. Is it possible that McConnell and Trump could twist enough arms to make it happen? Yes, but it would be extremely difficult.

So that’s how the stage is set and now we will be waiting to see what Trump decides to do.

Update: Here’s Trump getting the news that Ginsburg died and giving a classy response.

“She led an amazing life…She was an amazing woman, whether you agreed or not…I am sad to hear that.” —@realDonaldTrump