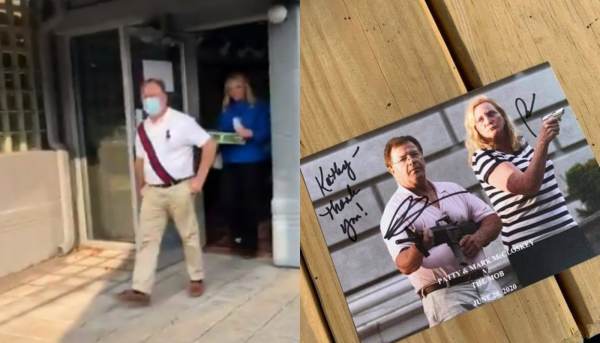 Remember Mark and Patricia McCloskey? They are the St. Louis could who became well-known this past summer for defending their home and property from a mob of BLM protesters.

They were harassed by a woman recently while they were out just trying to pick up their order of Christmas cards at the shop they had them printed off at. The entire incident was recorded and posted online. In the video you hear the woman who is filming, harrassing the calm and collected couple as they exit the shop and walk to their vehicle to leave.

She is heard shouting out colorful obscenities and threatening to abolish the suburbs. What you will see in this video are the McCloskeys being nothing but calm, collected and civil to the shouting woman maintaining their composure the entire time.

“Abolish the suburbs!” the woman yells. “You are terrorists.”

“Why aren’t you wearing a mask?” a male voice can be heard in the background, likely directed at Patricia McCloskey, who was mask-less.

You can see here for yourself what went down:

Patriot McCloskey’s get verbally harassed as they leave a shop with their Christmas cards pic.twitter.com/IpXE8WqC5u

Here are some of the responses to the video on social media:

Every time I see these I wish the handmaidens tale that they reference so much was real. These spoiled girls have never been told no in their lives.

gets pretty difficuIt to coexist when peopIe become committed to behaving Iike animaIs, no?

Mark and Patricia McCloskey got photos of them pointing guns at protesters made into holiday cards.#BlackLivesMatter communists mad as hell. pic.twitter.com/kuGDCZriRl

“No mask? You think pointing guns at protesters is nice?” hollers the woman. “It’s fun? You think you’re cool? Abolish the suburbs!”

“F**k you and your guns!” she continues yelling as the couple gets into their vehicle.

Before they get in their vehicle to exit the parking lot, Mark McCloskey grabs one of the cards and approaches the man who is with the harrasser, which appears to throw the shouting woman off by surprise as she yells:

To her surprise Mark McCloskey is NOT confronting the woman, but reaches out and offers one of the couple’s Christmas cards. The man accompanying the woman accepts the card.

“Thank you, Mark,” he responds as McCloskey returns to his vehicle.

As the McCloskeys begin to exit both the woman and man start shouting obscenities at the couple again.

Here are some more responses to the inceident from twitter:

They got 1,000 of these printed and have even been signing them pic.twitter.com/LPAhR8IRAl

Trump invited the McCloskeys to speak at the Republican National Convention where Patricia McCloskey stated that protesters “want to abolish the suburbs all together.” ?? They are clearly out of touch with the protesters explicit demands for the mayor to resign. pic.twitter.com/PZIDwXXCLb

What are your thoughts on all this? Does any of this unnecessary harrassment make any sense to you?

We want to hear from you! Join the conversation in the comment section down below!