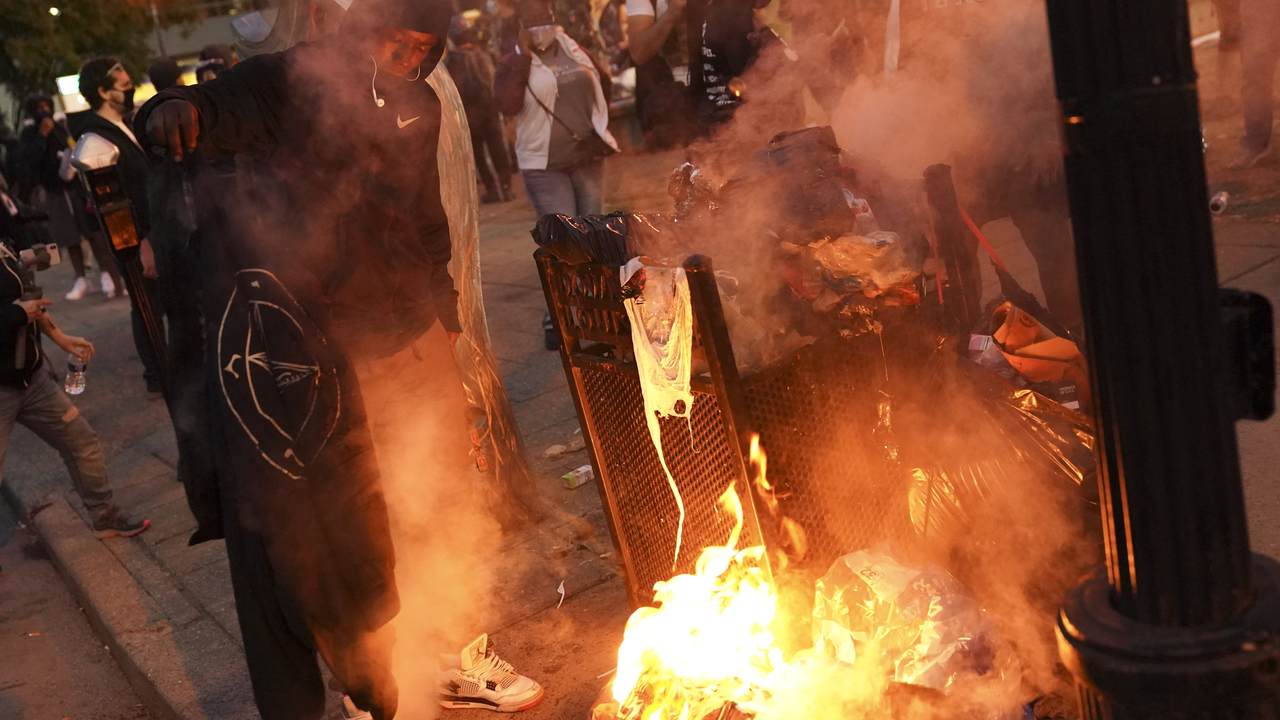 Democratic Kentucky lawmaker, and a group of protesters got themselves arrested when they attempted to gather at a church that was offering sanctuary downtown Louisville. The church is the First Unitarian Church, they told livesstreamers Thursday “houses of worship are exempt from the curfew” this was their way of getting around the law for the rioters to be out later without fear of being arrested for breaking the law.

Louisville Metro Polie officers declared an unlawful assembly after crowds congregated at the site of the church. State Rep Attica Scott and 16 other rioters were arrested at the scene.

There is video at the scene showing that rioters were threatening white people with assault and being physically aggressive with the press, kicking them from the shurch “sanctuary” grounds.

“So the church has opened this up as a sanctuary” — a place to get refreshments and legal aid if they need,” Brother Tim Duncan, a volunteer with the church explained amid the second night of protests after a Kentucky grand jury’s decision on the case of Breonna Taylor, who was killed by police gunfire in March.

Louisville protesters have maintained a tight formation tonight as they march through downtown ahead of the curfew at 9. A chopper and sirens punctuate the chants of demonstrators. pic.twitter.com/5KfWG2OhMX

“It is a way of showing that we are with you. We are a part with you, and we are with the struggle and a struggle that has gone on for centuries, that this God is one who is always on the side of the oppressed,” he later told Courier Journal reporters, standing under a banner at the church reading “Black Lives Matter.”

There were around 100 protesters that marched up to the church when curfew started.

I’m at First Unitarian Church on South Fourth where protesters are using as a safe space. I’ve been here since about 6 p.m. with organizers. It’s 9:01 — one minute past curfew.

Churches are not included in the city’s curfew. @courierjournal pic.twitter.com/frHaZnq845

Scene from inside the church’s courtyard.

Folks who’ve claimed sanctuary have been using this to peer outside. There are at least three dozen people inside. @courierjournal pic.twitter.com/5yyoS5PDl4

Livestreamer Brendan Gutenschwager tweeted video reportedly from the scene, explaining that “White people have just been threatened with assault and kicked out of the church sanctuary grounds.”

“Almost all press were demanded to leave as well,” he added.

White people have just been threatened with assault and kicked out of the church sanctuary grounds. Almost all press were demanded to leave as well #Louisville #LouisvilleProtests #BreonnaTaylor pic.twitter.com/NK1cJVnBU8

It’s just not safe at the moment.

The rioters were destroying property in a nearby downtown park on their way to the church, including breaking the window at the town’s library near the church and throwing a flare inside.

“Officers remained at 4th and York in order to secure the area so maintenance could address the library windows that were broken and an arson investigation begun,” Sgt. Lamont Washington, LMPD spokesman said in a statement.

Unlawful assembly was decalared at this point by police officers due to the damage that was caused to the public buildings along the route of the protestor’s march. There were several arrests made after curfew as they encircled the First Unitarian Church.

Rep. Scott was there attempting to join the crowd gathered at the church when she was arrested as well. With her were her daughters Ashanti and Shameka Parrrish-Wright, who were also arrested. They are the co-chairs of the Kentucky Alliance against Racist and Political Repression.

Scott is the only black woman in the state legislature and the sponsor of a bill that is called “Breonna’s Law”. This bill seeks to put an end to the no-knock warrant in the state. She was charged with unlawful assembly and first-degree rioting, a Class D felony.

“People went to the church as a safe place, others failed to disperse,” LMPD spokesperson Jessie Halladay said, according to WFPL. “Once we clear out people will be allowed to leave and go home.”

Rumors circulated that police were going to storm the church to arrest the rioters, but they were silenced upon finding out that they would be allowed to go home without facing arrest if they abided by the directions given them.

Just talked with an @lmpd spokesperson who said police have absolutely no intention of storming the church that is offering sanctuary to protesters. The spokeswoman wanted to assure people that isn't true. https://t.co/UypBh0fiGf

“Contrary to rumors on social media, the LMPD, at no time, was waiting for ‘a decision from legal about whether or not they can storm the property,’” LMPD spokesman Lamont Washington said. “No arrests were made for being on church property. No National Guard was deployed.”

The protesters were allowed to leave. They were told that if they didn’t want to be arrested for unlawful assembly they needed to remain on the sidewalk and head straight to their cars or home.

Here’s a member of the First Unitarian Church explaining the motivation for offering sanctuary to Louisville protesters. pic.twitter.com/bCwPurXpj5