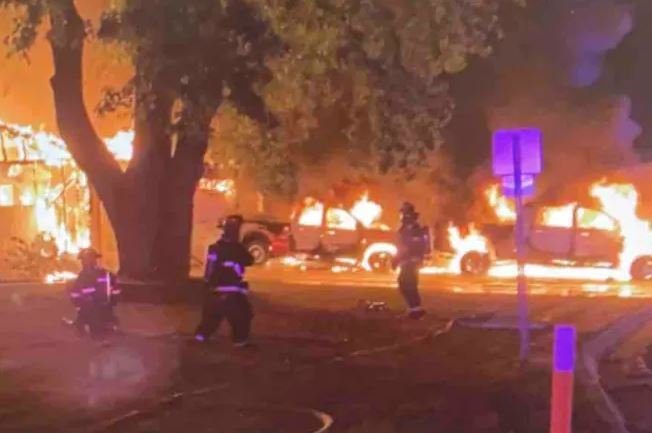 More mayhem heating up in Democratic run Minnesota. This time it was a Trump supporter who woke up in his own home on Wednesday because he heard a huge explosion out in their garage. When he went to investigate the cause he found that his entire garage including his vehicles and a camper were all on fire and it was by no accident.

Police are right now investigating this incident as an arson attack. It is suspected that the attack was politically motivated according to a release from the Brooklyn Center Police Department.

The homeowner had a huge Trump 2020 sign posted up in their yard, and it’s looking like this might have been the motivation behind the vandalizm and arson.

This is not the only attack that has been reported this week.

However, what Americans woke up to today in DC, looked nothing like the work of a movement. Over night Antifa militants stormed DC and destroyed the city’s local diners. Protesters took to the streets Wednesday night following the Breonna Taylor grand jury decision and the protest soon turned into a violent riot.

It is the response of Antifa and Black Lives Matter protesters in the streets that has 2 police officers shot and a wave of mayhem continues to destroy cities and American property.

You can see Antifa-BLM rioters terrorizing diners in DC, as they chant the words, “silence is violence!”

They harrassed local diners, even surrounding a couple who were dining at the restaurant and proceeded to scream at them. These violent protesters entered these places of business and started turning over tables and breaking chairs, destroying property and terrorizing innocents.

What should be done about the unrest and wave of violent protesters running the streets?

Tell us your thoughts in the comment section below!

The Hate That Dare Not Speak Its Name
November 27th, 2021 Sons of Liberty Media