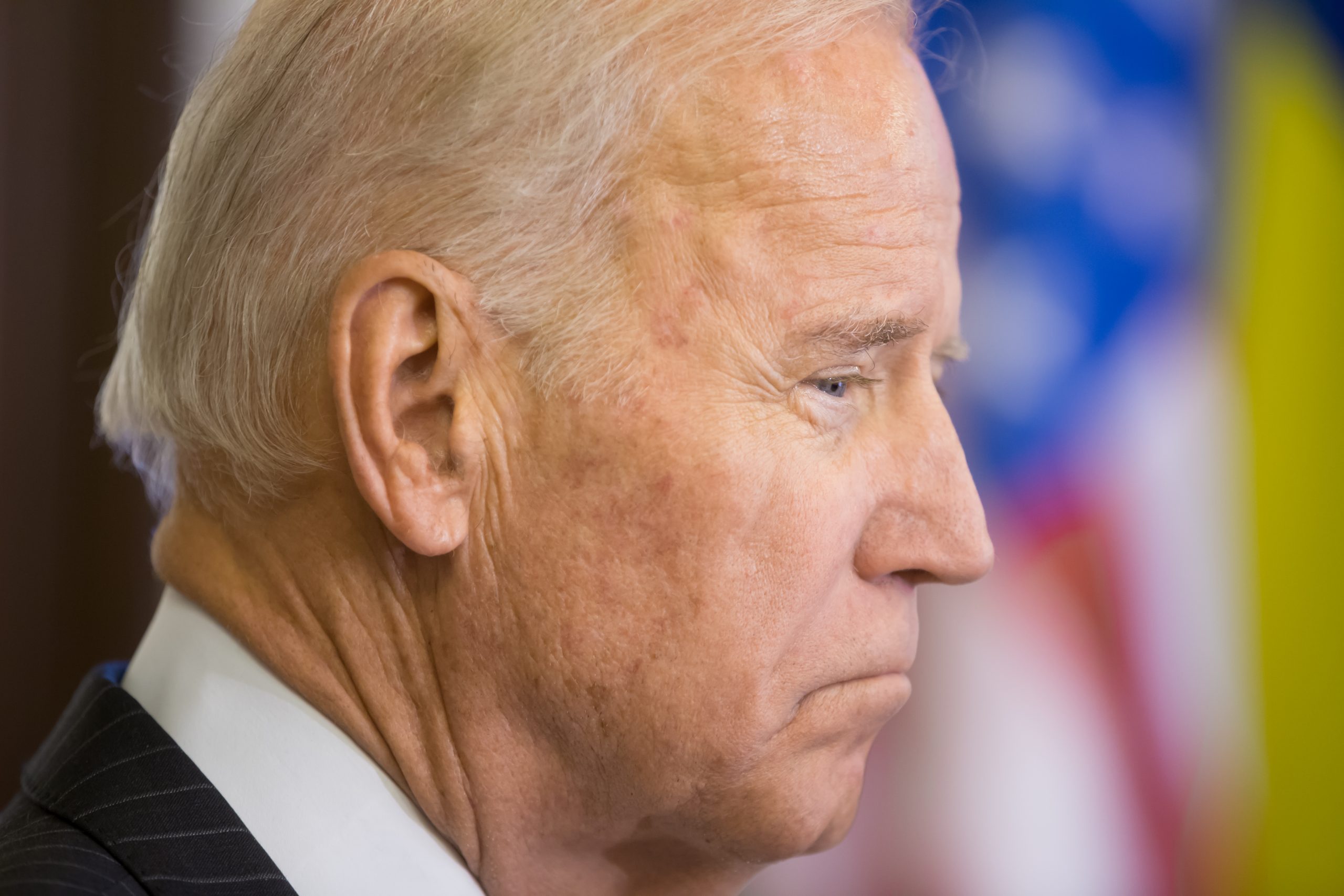 Well well well how the tables have turned. Just kidding, these Democrats have always been shady with their mask wearing, they are just getting caught now. The newest to get caught with his metaphorical pants down is Democratic presidential nominee Joe biden. He was conspicuously without his trademark face mask and it was caught on video that was shared by ABC News “20/20” reporter Beatrice-Elizabeth Peterson.

I asked the former Vice President if the gloves were off against @realDonaldTrump? @JoeBiden said “yes.”

He also added that when it comes to his support with Hispanic his numbers “are much higher” than Trump’s. pic.twitter.com/6WYExKTb5d

Then only 4 days later this is what Biden tweeted:

“Do your part. Wear a mask,” along with an eerie video of himself putting one on.

Do your part. Wear a mask. pic.twitter.com/pdnEecS49Q

Biden talks all the time about him and his “national mask mandate” which essentially mean him FORCING Americans to wear a mask when they are outdoors. BUT…even with all his talk about masks, he has still been seen more than once without one.

9/30: Ignoring social distancing guidelines, Biden walks up to a group of officers and speaks to them in very close proximity… while not wearing a mask. pic.twitter.com/nRUM2xbZFs

9/17: After Biden said he would mandate mask wearing as President, he went up to a group of people to talk to them… without a mask on. pic.twitter.com/oqo0w2jWc2

"Wearing your mask is your patriotic responsibility." — @JoeBiden pic.twitter.com/2Bq6e1x4ko

Joe Biden 5 days ago … no mask, no social distancing pic.twitter.com/051vWa6d6d

Now, we all know that he free to choose for himself if he will wear a mask or not, because…this is America. But, its a little shady for him to not wear one while using fear tactics in telling everyone else they need to.

Just look at what the candidate’s Twitter account posted Monday when a COVID-19 positive President Donald Trump was readjusting to being back at the White House after a stint at Walter Reed National Military Medical Center:

On Tuesday morning, he tweeted, “Folks, we can save nearly 100,000 lives by the end of the year if everyone wears a mask in public. Do your part. Protect your neighbors. Wear a mask.”

Folks, we can save nearly 100,000 lives by the end of the year if everyone wears a mask in public.

Do your part. Protect your neighbors. Wear a mask.

Trump has tried not to make a big issue out of wearing masks amid the coronavirus pandemic.

And he hasn’t needed to, as the establishment media and Democrats have done that for him.

They lost their collective minds Monday night when Trump took off his mask outside the White House, where he lives, while alone.

– Broke Quarantine while COVID Positive
– Got into a fight with a biker without a mask
– Likely infected his family with the Virus
– Faked his emergence from his basement on air..

Is offended that President Trump took his mask off on his balcony. pic.twitter.com/qlko8ifhK0

Democrat after democrat have been caught discrediting their own relentless mask messages.

A hot mic moment between two Pennsylvania Democrats last week gave us some pretty good insight into why some Democrats wear masks.

While speaking with Gov. Tom Wolf, State Rep. Wendy Ullman seemed to give away how some of our leaders really feel about masks.

Ullman laughed, then told Pennsylvania’s Democratic governor, “I will as well. I’m waiting so we can do a little political theater.

“So that it’s on camera,” she added, before the two politicians chuckled.

The video was quickly seized on by opponents of mandatory mask-wearing, as it should have been.

I hope every person in Pennsylvania sees this video! The Governor is killing your states economy for “political theater.” https://t.co/u5srZrmPYK

With Democrats getting caught maskless, their hypocrisy can be frustrating, especially when they are likely the cause of panic that are in many other Americans when it comes to masks. Even to the point of taking away anothers freedom….to enforce them to wear a mask.

For instance this recent story that happened in Idaho…

A high school football game in Idaho was cancelled during half-time after a parent who was there to watch his son play refused to wear a mask. Ammon Bundy, who is most known for a 2016 standoff at an Oregon wildlife refuge was there and just wanted to watch his son play football. However, he was turned away at the gate for refusing to adnere to Caldwell’s coronavirus policy on masks.

He was refused at the entrance and proceeded to try and watch the game from the parking lot outside the stadium instead. Once again he was approached and asked to leave by the game hosts, despite peacefully agreeing to no entrance and settling at watching his son play from the parking lot. When he didn’t comply with their demand to leave, Caldwell administrators decided to call the game off and send everyone home. It was Emmett High School Huskies (Bundy’s Son’s team) vs the Caldwell Cougars and Emmett was winning 35-0 when the game was cancelled.

Emmett High School does not enforce a policy that requires fans to wear masks. Bundy has been able to attend his son’s football games mask-less before this incident in Caldwell.

Bundy explained why he refused to wear the mask:

“I have a strong belief in my right to choose to wear a mask or not,” Bundy said. “And If they think somehow there’s a safety issue, then they need to section off a part of the bleachers to accommodate for those of us who believe differently than others.”

As for the winner of the cancelled game, it has not been declared yet. Despite Emmett’s lead on the scoreboard, the win could go to host Caldwell Cougars as winners by forfeit, if it is found that Caldwell administrators enforced their policy on Bundy correctly, making their policy clear to him.

“It depends on what was directed to Mr. Bundy and who is the offended team was here,” Jones said.

“This is incredibly sad for the Emmett High School football team, high school and community. They were winning the game,” Woods said in a statement over the weekend.

“They’ve been having a great season, and they’ve worked hard. We were the visitors. We should respect the host’s policies and procedures. Whether you agree or not when it comes to masks, the football team should not have to suffer the consequences. I’m proud of the Huskies. They did not ask for this.”

According to People’s Rights FB Page:

“Now Caldwell High School administrators are actively seeking to take the win away from Emmett High School in what appears to be an attempt to persuade the Emmett community to socially punish Ammon & his family for a non-compliance to their demands.”

October 2, 2020
Friday evening, Ammon Bundy & his family went to watch their son and brother play football at Caldwell High School. They were denied access into the football stadium because of a masks policy. The family moved far away from the ticket booth and began to watch the game from the parking lot. Ammon went back to the ticket booth and offered to pay for full admission to watch the game outside the stadium fence. He then returned to his family. The family did nothing to bring attention to the situation, they only wished to watch and support their son and brother playing in the game. Caldwell High School administrators would not allow Ammon or his family to pay for or watch the game from the parking lot. Caldwell Police were called in to remove the family from the property but they refused to enforce the will of the Caldwell High School administrators because the family was not causing a disruption or posing a threat to anyone. Ammon & his family were peacefully watching the game outside the stadium fence from the west parking lot. Out of desperation to enforce their demands, Caldwell High School administrators ended the football game at halftime. The reason given to Ammon and his family was, “They would not comply with their (the administrators) demands.”

Caldwell High School administrators are now actively seeking to take the win away from Emmett High School in what appears to be an attempt to persuade the Emmett community to socially punish Ammon & his family for non-compliance to their demands.