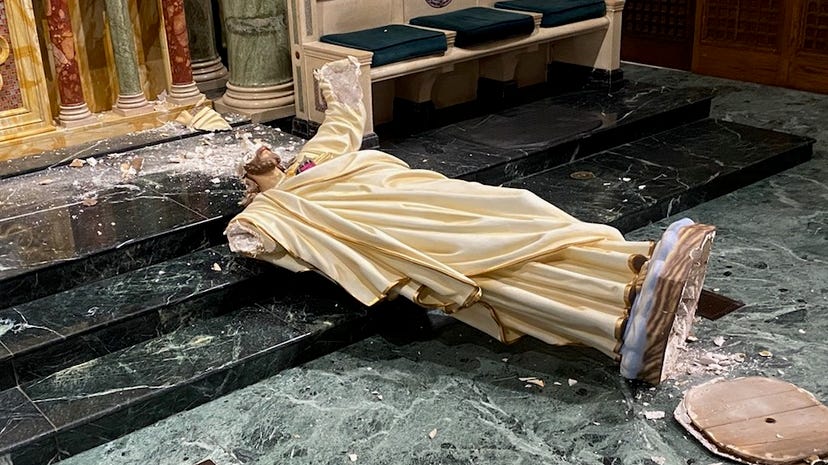 El Paso police found themselves arresting a man for allegedly destroying a statue of Jesus due to the color of its’ skin. The man claimed the color of its’skin was “wrong” and needed to be destroyed.

Isaiah Cantrell, who is now being held on $20,500 bond, is a 30-yr-old man with a colorful criminal history, including charges of criminal mischief and marijuana possesion.

It is reported that Cantrell claimed:

“The skin color of the statue was the wrong color.”

“Jesus was Jewish and therefore should be a darker skin color.”

Many were devastated over the loss of the statue, including the Bishop:

“At this point, we do not know anything about the person who carried out this assault, but he certainly must be a person who is greatly disturbed to have attacked this peaceful place in our city and this image of the King of Peace. I hope this might be the impetus for him to receive the help he needs. He will be in my prayers,” he continued.

“I am devastated at this irreplaceable loss as I know members of this parish community and the whole Church of El Paso will be. In this moment we will reach out in confidence to the One this statue represented and I know he will console us,” Seitz said.

“I am in shock and we at the Cathedral are heartbroken over such an unexpected situation,” added Fr. Trini Fuentes, the Rector of the Cathedral.

Is this just about a man being disturbed though?

Just this past June, well known BLM activist Shaun King announced that he supports the destruction of statues depicting a white Jesus. King, who has always been known as an outspoken supporter of Black Lives Matter made his remarks through his twitter account.

In his post he stated that historians believe Jesus likely had the same physical attributes as the people who live in the Middle East during his time, and not the white man that is typically depicted through statues.

“Yes, I think the statues of the white European they claim is Jesus should also come down,” King tweeted. “They are a form of white supremacy. Always have been.”

“In the Bible, when the family of Jesus wanted to hide, and blend in, guess where they went? EGYPT! Not Denmark,” he added. “Tear them down.”

In response to the flood of responses that came in after his initial tweet, King had this to say:

Now the destruction of this statue has come with a purpose that echoes the call to action from King.

Cantrell boldly walked into the St. Patrick Cathedral early in the morning, went straight behind the main altar where the statue stood at and destroyed it. He destroyed most of the statue’s head and the right arm was broken off.

We want to hear from you! Let us know what know your thoughts in the comment section below!

Are We Witnessing The Collapse Of America’s Form Of Government?
Conservative Firing Line