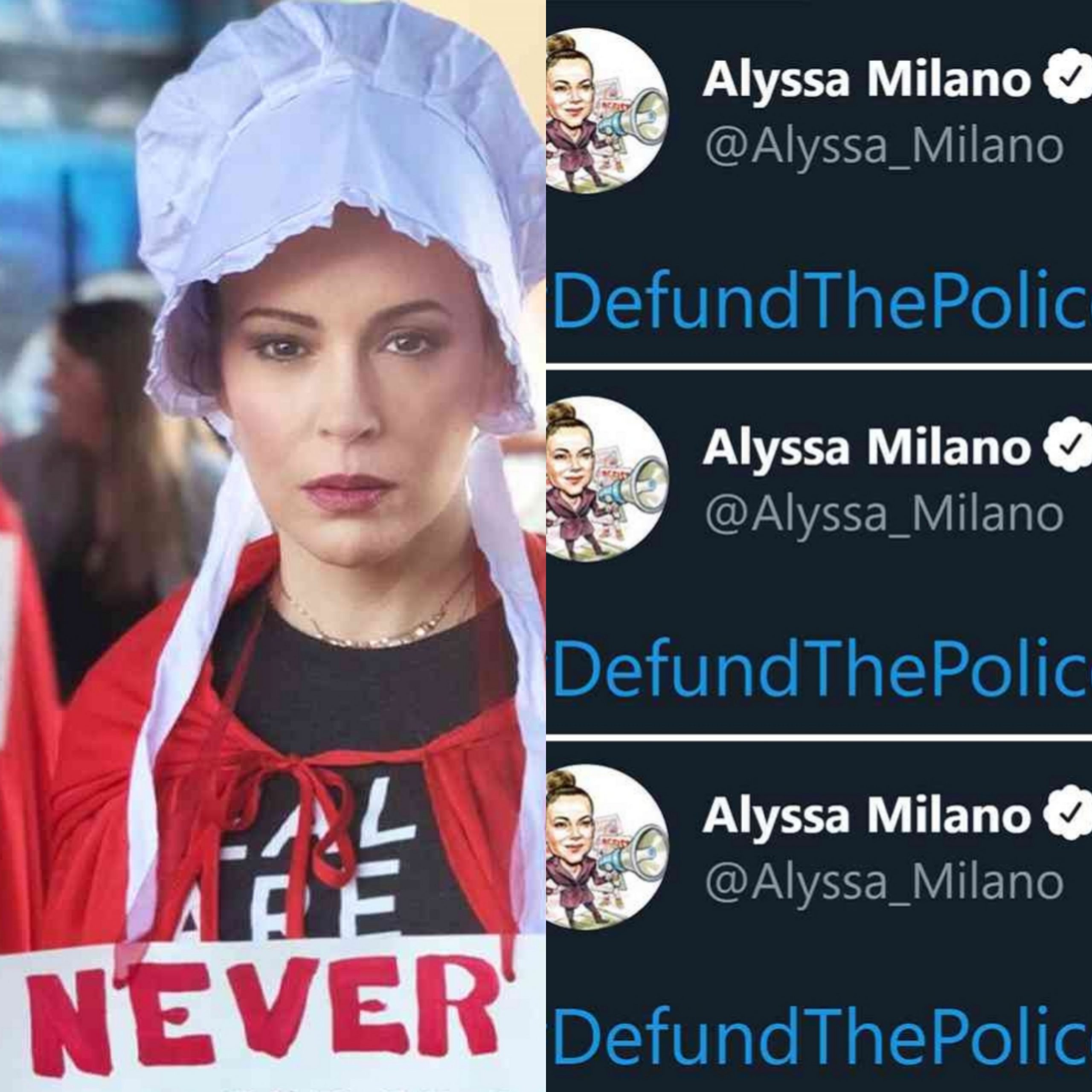 Oh how the tables have turned….

Actress and MAJOR ‘Defund the police’ activist Alyssa Milano was real quick to call 911 when she thought there was an armed gunman on her property Sunday morning.

She called scared for her life, and the police that she so desperately wants to take down, responded. They showed up for her safety in a BIG way with seven Ventura County Sheriffs’, one K-9 unit, a police helicopter and one Los Angeles Fire Department team responded.

One neighbor told reporters what she witnessed:

‘We first noticed the helicopter circling overhead very low and knew something was going on, it’s usually such a quiet community. Then we saw all the police cars parked in front of Alyssa’s home. They had their guns at the ready and seemed very serious.’

Alyssa and her talent agent husband Dave Bugliari, 39, they said, had dialed 911 when they heard what they believed to be gunshots on their 1.39-acre property.

They allegedly told the emergency hotline the sound ‘scared their dogs’ and made them feel like the gunman was nearby.

A description was given of a suspect to the officers who was ‘male, 40-years old, with long rifle’.

The two, who have been married since 2009, were also concerned that it may be someone stalking the former Charmed and Who’s The Boss star.

In 2008, Alyssa filed restraining orders against alleged stalker Jeff Turner, a then 54-year old man she claimed twice tried to break into this same home.

Their neighborhood watch app was on fire when all this was going on. One neighbor wrote:

‘Just drove by about 12 armed officers on Bell Canyon Road,’ one resident wrote, ‘They are responding to a call reporting a man with a gun in the neighborhood!! This was also the cause of the helicopter. Stay inside, stay safe!’

Milano’s gate was open and had law enforcement posted up guarding the entrance and entire perimeter of her street. The search took hours before ending at 12:20pm when they learned that the gunman was actually a neighborhood teenager with an air gun that was out shooting squirrels. He had seen the incoming response units and fled to safety only to realize later that it was him who had caused the scene in the first place and then turned himself in.

The officers that responded invited some of the residents to an impromptu meeting to debrief them on what they dubbed ‘Squirrelgate’ so that they could go home feeling safe once again.

All this just a couple months after Alyssa tweeted out to her millions of followers a link, pleading with them to sign the ‘People’s Budget L.A.’ that was a petition to demand an entire 90 percent CUT from police funding.

Then the following month in August Milano sent out a short tweet as a reminder to her followers that her stance isn’t going to change.

Doesn’t that feel a little at odds with her response to danger? Who did she call for help? THE POLICE!

‘She can tweet those things because at the end of the day she lives behind gates in a gated community. She knows the police will come to save her. But what about all those people who don’t have that luxury and live in unsafe neighborhoods? She obviously doesn’t care.

‘She uses her platform in hypocritical ways. Why not send your husband into the yard to find out what is actually going on before you call the police? I would guesstimate the response today from law enforcement cost tax payers thousands of dollars.’