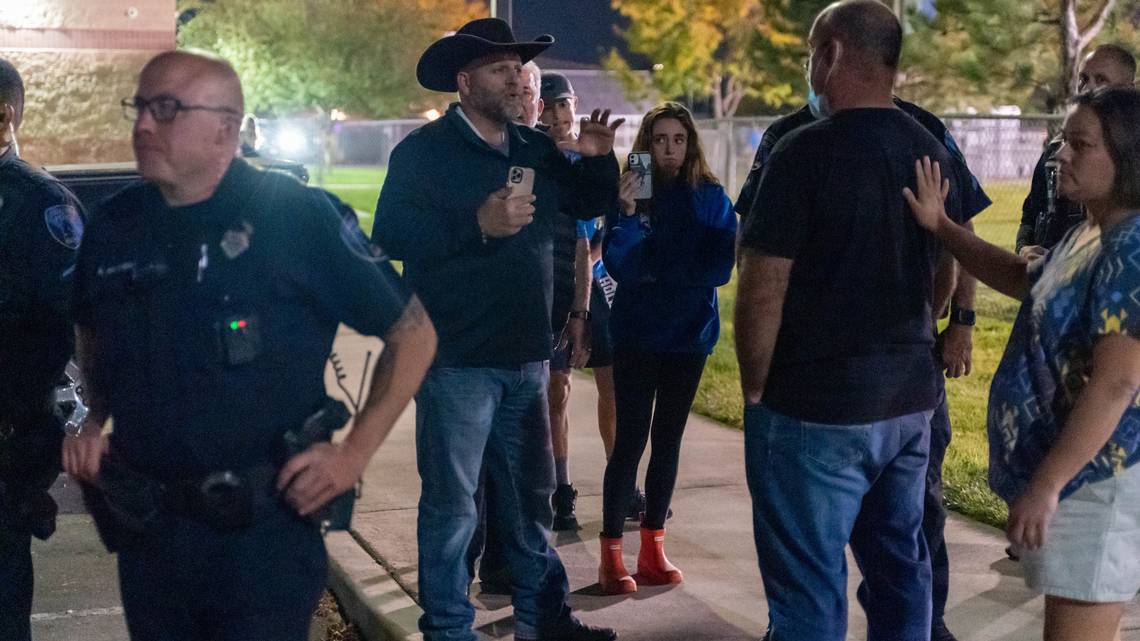 A high school football game in Idaho was cancelled during half-time after a parent who was there to watch his son play refused to wear a mask. Ammon Bundy, who is most known for a 2016 standoff at an Oregon wildlife refuge was there and just wanted to watch his son play football. However, he was turned away at the gate for refusing to adnere to Caldwell’s coronavirus policy on masks. 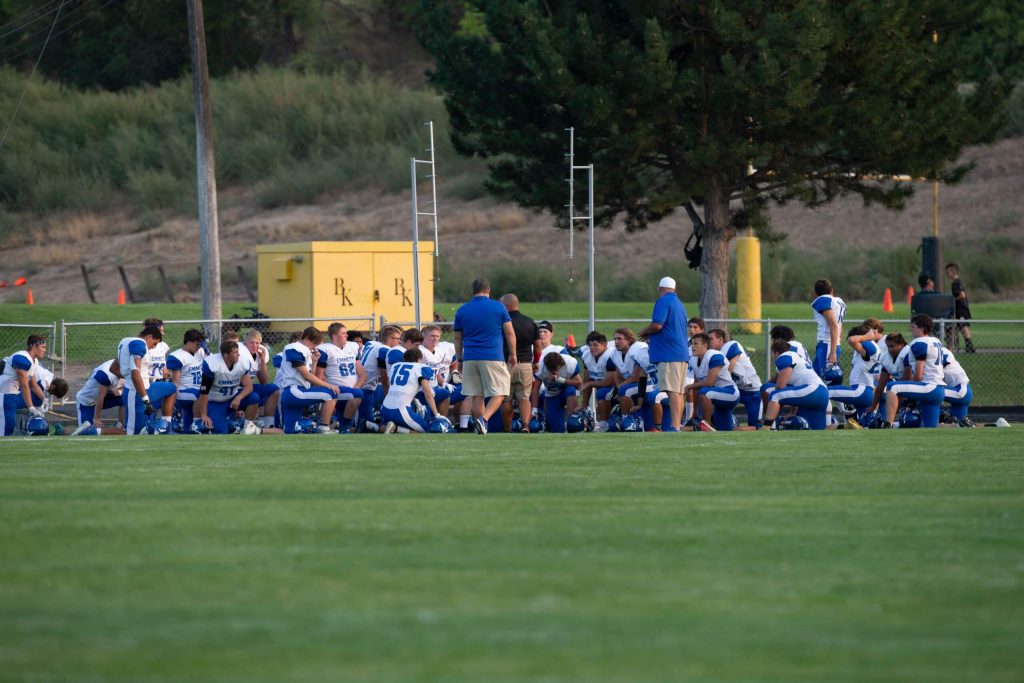 He was refused at the entrance and proceeded to try and watch the game from the parking lot outside the stadium instead. Once again he was approached and asked to leave by the game hosts, despite peacefully agreeing to no entrance and settling at watching his son play from the parking lot. When he didn’t comply with their demand to leave, Caldwell administrators decided to call the game off and send everyone home. It was Emmett High School Huskies (Bundy’s Son’s team) vs the Caldwell Cougars and Emmett was winning 35-0 when the game was cancelled.

Emmett High School does not enforce a policy that requires fans to wear masks. Bundy has been able to attend his son’s football games mask-less before this incident in Caldwell. 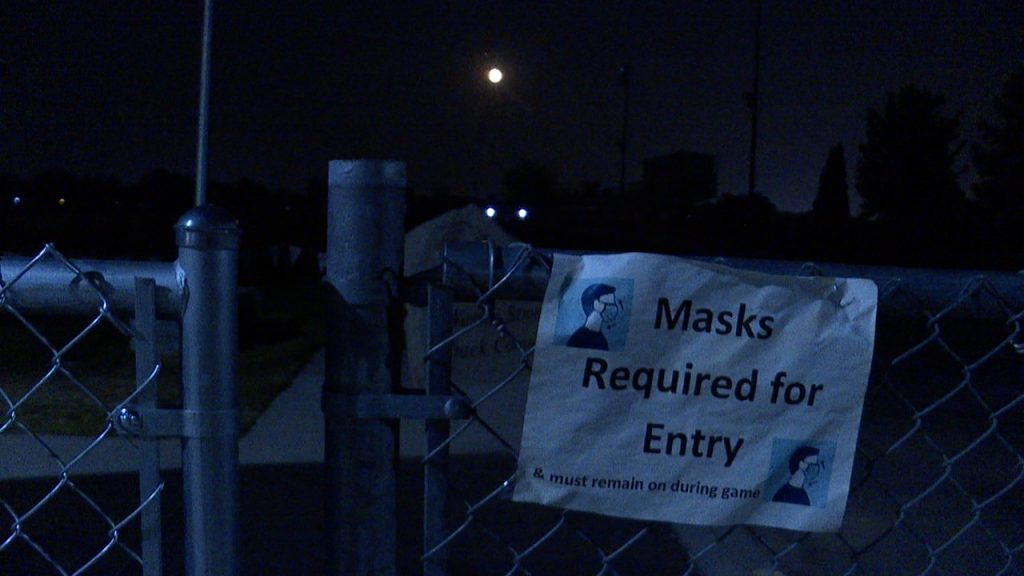 Bundy explained why he refused to wear the mask:

“I have a strong belief in my right to choose to wear a mask or not,” Bundy said. “And If they think somehow there’s a safety issue, then they need to section off a part of the bleachers to accommodate for those of us who believe differently than others.”

As for the winner of the cancelled game, it has not been declared yet. Despite Emmett’s lead on the scoreboard, the win could go to host Caldwell Cougars as winners by forfeit, if it is found that Caldwell administrators enforced their policy on Bundy correctly, making their policy clear to him.

“It depends on what was directed to Mr. Bundy and who is the offended team was here,” Jones said.

“This is incredibly sad for the Emmett High School football team, high school and community. They were winning the game,” Woods said in a statement over the weekend.

“They’ve been having a great season, and they’ve worked hard. We were the visitors. We should respect the host’s policies and procedures. Whether you agree or not when it comes to masks, the football team should not have to suffer the consequences. I’m proud of the Huskies. They did not ask for this.”

According to People’s Rights FB Page:

“Now Caldwell High School administrators are actively seeking to take the win away from Emmett High School in what appears to be an attempt to persuade the Emmett community to socially punish Ammon & his family for a non-compliance to their demands.”

October 2, 2020
Friday evening, Ammon Bundy & his family went to watch their son and brother play football at Caldwell High School. They were denied access into the football stadium because of a masks policy. The family moved far away from the ticket booth and began to watch the game from the parking lot. Ammon went back to the ticket booth and offered to pay for full admission to watch the game outside the stadium fence. He then returned to his family. The family did nothing to bring attention to the situation, they only wished to watch and support their son and brother playing in the game. Caldwell High School administrators would not allow Ammon or his family to pay for or watch the game from the parking lot. Caldwell Police were called in to remove the family from the property but they refused to enforce the will of the Caldwell High School administrators because the family was not causing a disruption or posing a threat to anyone. Ammon & his family were peacefully watching the game outside the stadium fence from the west parking lot. Out of desperation to enforce their demands, Caldwell High School administrators ended the football game at halftime. The reason given to Ammon and his family was, “They would not comply with their (the administrators) demands.”

Caldwell High School administrators are now actively seeking to take the win away from Emmett High School in what appears to be an attempt to persuade the Emmett community to socially punish Ammon & his family for non-compliance to their demands.

Here are the videos that were shared on Bundy’s facebook page. Each capturing interactions that took place during the refusal to mask incident.

I’m at my boys football game in Caldwell Idaho and they are saying I cannot go in. They are also saying I cannot watch from the fence. I offered to pay but they would not take my money.

Till here, the Caldwell police are still here it they are not using force. Right now.

Video of Emmett Huskies’ Coach and Ammon at the Friday night game: