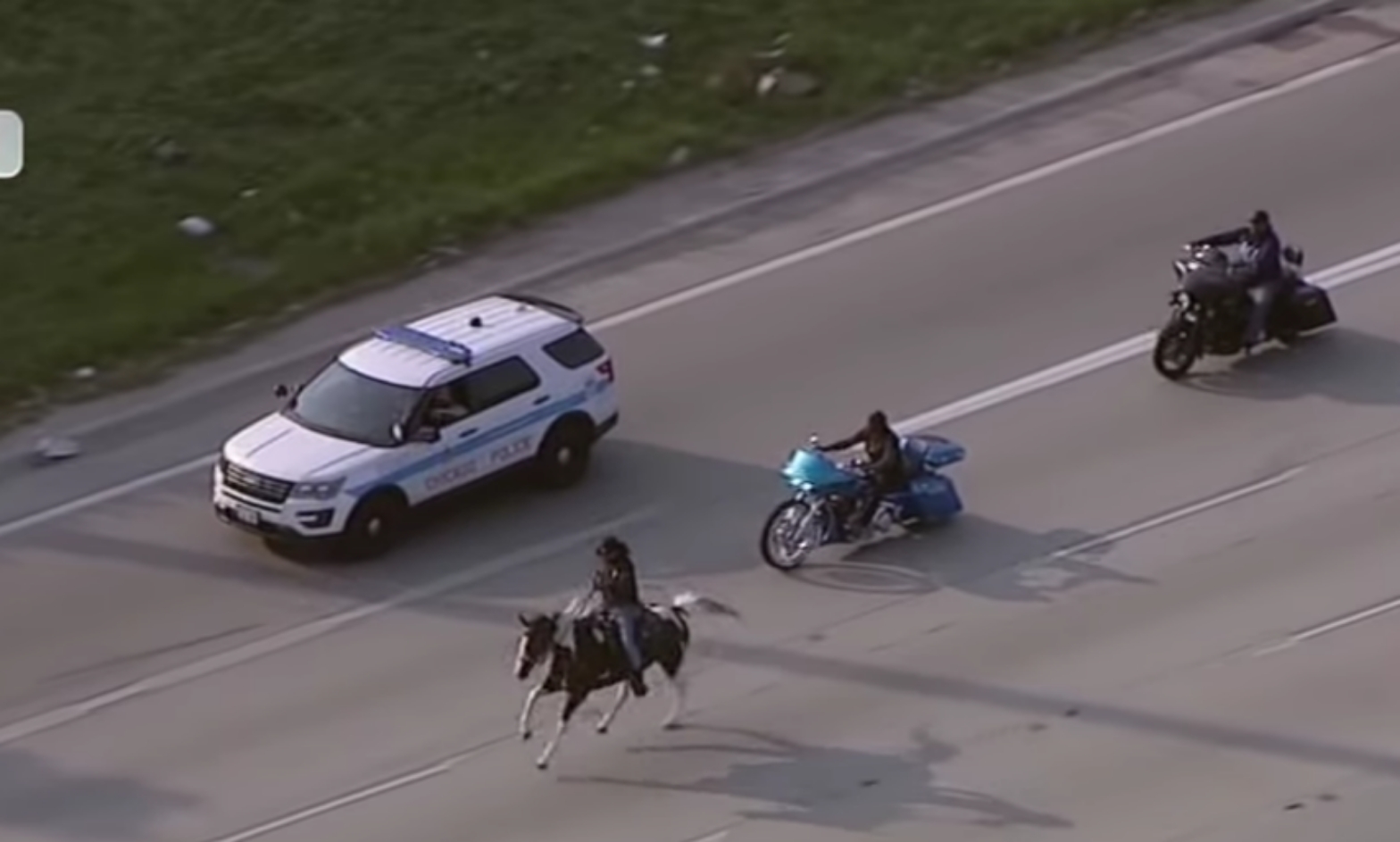 This is simply horrific and one of the many reasons I detest Chicago Mayor Lori Lightfoot. The so-called “Census Cowboy” she employed for political propaganda reasons, whipped and kicked his horse on a seven-mile protest run. Now, the poor injured horse may have to be put down because of this abuse. The guy forced the horse to run 7 miles down the Dan Ryan Expressway on Monday afternoon. The horse’s name is NuNu and by the time all of this was said and done, he was in critical condition and might have to be euthanized.

Assistant State’s Attorney Kevin Deboni stated that 33-year-old activist Adam Hollingsworth’s horse was not equipped with shoes when he took it “trotting for miles” in a “Kids’ Lives Matter” protest, injuring the horse’s legs and feet. They were bloody at the end of the trek and NuNu must have been in horrible pain. At one point, NuNu collapsed, but Hollingsworth whipped the horse to keep it moving. Two veterinarians examined NuNu and said that the horse “suffered greatly, bled profusely,” collapsed repeatedly, and was not correctly saddled and cushioned. NuNu collapsed repeatedly during treatment as well.

Hollingsworth said that he rode the horse on the Dan Ryan Expressway during rush hour to support the #KidsLivesMatter movement, and then described the initiative as one “that aims to raise awareness and motivate residents to fill out the census to help communities receive better funding.” According to Block Club Chicago, the movement is in response to children killed by gun violence. How about horses killed because of liberal indifference?

But there’s more… Hollingsworth put a post up on Facebook with a video on June 11th stating that he was going to ride his horse til it dies. What a monster. So, he meant to do this. After the 7-plus mile run, the horse’s heart was racing at twice its normal rate, and his eyes were so dilated, they looked like cartoon eyes. Authorities stated that it was the equivalent of forcing an 80-year-old woman to run a full marathon. There were also open sores beneath NuNu’s saddle.

The man appointed by Mayor Lightfoot to be Chicago’s “Census Cowboy” rode his horse until it bled to draw attention to a social justice cause. It didn’t have proper shoes for pavement and suffered extensive damage, galloping for miles. It will be put down. pic.twitter.com/Yp5z85Lmi0

If NuNu hadn’t received immediate medical attention, he would have died according to both veterinarians. Even so, the horse is still in critical condition. It “will never be deemed suitable to ride again, and euthanasia may be utilized for humane reasons due to the suffering the animal will likely endure for the rest of its life,” Deboni told Cook County Judge David Navarro.

Hollingsworth was charged with animal cruelty, reckless conduct, trespass to state land, and traffic violations. Unbelievably, Emily Bock, his public defender, disputed the extent of any injuries the animal received and said Hollingsworth was “known for” riding horses. “NuNu was well-fed, and saddle sores are common,” she countered. Bock said experts disagree about whether horses need to be shod to walk on concrete. Anyone who knows horses knows that is drivel.

She went on to try and make this jerk look like a hero. Hollingsworth is married, a father of one, and “a pillar in the community,” Bock said as she asked Navarro to release him on a recognizance bond.

“Your attorney referred to a protest,” Judge Navarro stated after hearing from the attorneys. “The horse doesn’t know that it’s part of a protest.” Navarro said the treatment described by prosecutors “appears criminal” as he recounted allegations that NuNu collapsed and was beaten to get up. “Reference is made to the census,” Navarro said. “I don’t know what any of this has to do with the promotion of the census… [it appears] more related to the promotion of yourself.”

Navarro then set bail at $25,000. Hollingsworth went home a few hours later after posting a $2,500 deposit bond. Chicago Mayor Lori Lightfoot (D) tapped Hollingsworth to work with her earlier this year to boost census participation in the city.

In a statement, Mayor Lightfoot’s office condemned Hollingsworth’s “stunt.” “There is a right way and a wrong way to call attention to issues of great importance and this stunt was decidedly the very wrong way,” the mayor’s office said in its statement. Way too little, way too late if you ask me.