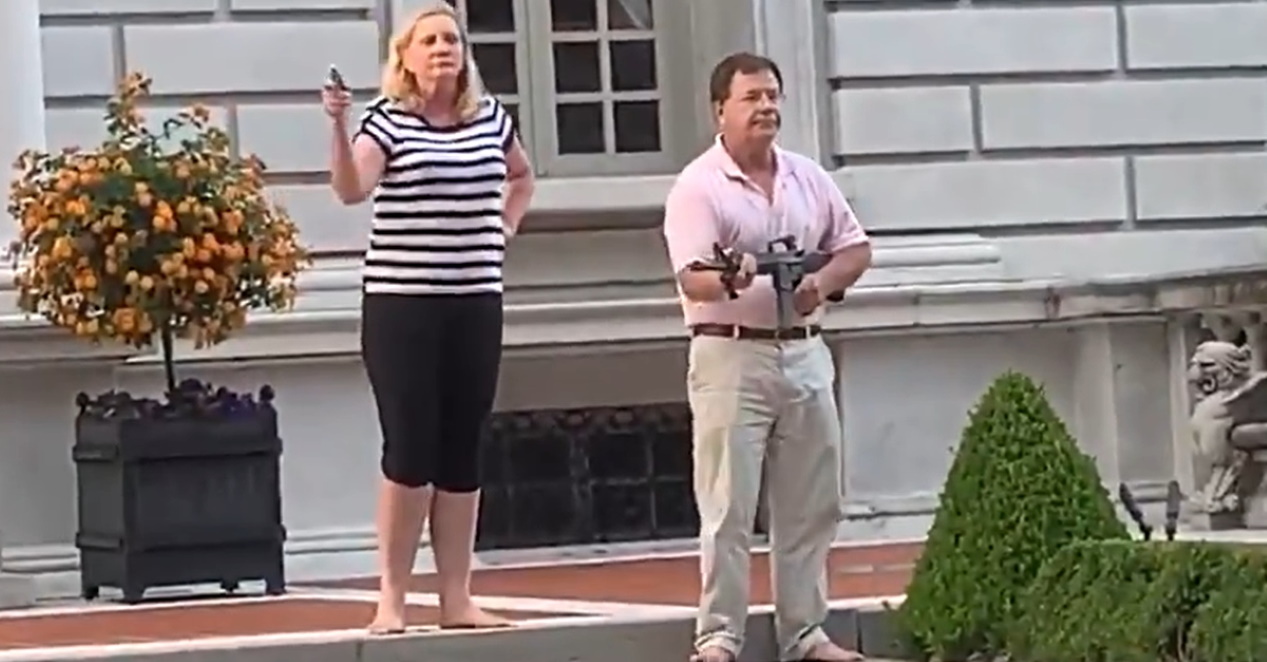 Mark and Patricia McCloskey were indicted by a grand jury on Tuesday. The charges brought against them are related to their June 28, 2020 incident when they used guns to keep protesters away from their property.

A grand jury indicted Mark and Patricia McCloskey Tuesday on charges related to their June 28, 2020, use of guns to keep protesters away from their home.

KSDK reports that the grand jury indicted the McCloskeys on “exhibiting a weapon and tampering with evidence.”

Breitbart News reported that Mark held an AR-15 and Patricia held a handgun on June 28, in hopes of deterring protesters from damaging their home or property.

Video of the couple standing outside their home went viral:

A couple has come out of their house and is pointing guns at protesters in their neighborhood #StLouis #lydakrewson pic.twitter.com/ZJ8a553PAU

The investigation was opened against the McCloskeys only two days after the “friendly” stand-off with the protesters on June 30.

“I am alarmed at the events that occurred over the weekend, where peaceful protestors were met by guns.” St. Louis Prosecutor Kiberly Gardner said:

“We must protect the right to peacefully protest, and any attempt to chill it through intimidation or threat of deadly force will not be tolerated.”

But the Hill reported Missouri Gov. Mike Parson (R) believed the McCloskeys did that which was lawful, that they “did what they legally should do.”

Parson said, “A mob does not have the right to charge your property. They had every right to protect themselves.”

He also suggested that he could very well pardon the McClockeys if they were actually charged for their use of firearms.

Parson used a July 18, 2020, tweet to say, “We will not allow law-abiding citizens to be targeted for exercising their constitutional rights.”

Last I checked defending your home and property from a mob of protesters isn’t a crime, especially if there has been violence involved with said protesters causing mayhem on the streets. Over the summer since this incident..the MCloskeys have had more trouble come their way as well.

They were harassed by a woman recently while they were out just trying to pick up their order of Christmas cards at the shop they had them printed off at. The entire incident was recorded and posted online. In the video you hear the woman who is filming, harrassing the calm and collected couple as they exit the shop and walk to their vehicle to leave.

She is heard shouting out colorful obscenities and threatening to abolish the suburbs. What you will see in this video are the McCloskeys being nothing but calm, collected and civil to the shouting woman maintaining their composure the entire time.

“Abolish the suburbs!” the woman yells. “You are terrorists.”

“Why aren’t you wearing a mask?” a male voice can be heard in the background, likely directed at Patricia McCloskey, who was mask-less.

You can see here for yourself what went down:

Patriot McCloskey’s get verbally harassed as they leave a shop with their Christmas cards pic.twitter.com/IpXE8WqC5u

This kind of harrassment is unacceptable. However, the response from the McCloskey couple was full of class and composure.

Do you think they should be punished by the law for defending their home?