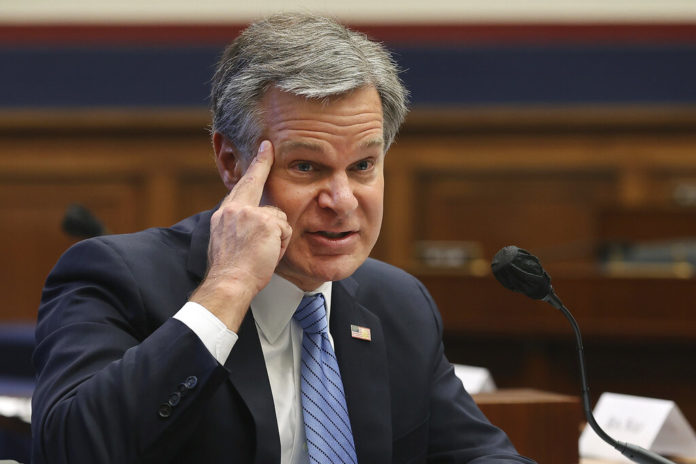 SURPRISE SURPRISE! FBI Director Christopher Wray seems to be downplaying the concern about election fraud to the Senate Homeland Security Committee. On Thursday Wray told the bureau that he had not “seen historically any kind of coordinated national voter fraud effort in a major election, whether it’s by mail or otherwise.”

Wray did admit that the FBI has in fact seen local election fraud “from time to time” , but wasn’t sold on the idea that anyone could pull it off at a national level.

“Certainly to change a federal election outcome by mounting that kind of fraud at scale would be a major challenge for an adversary,” Wray said.

According to The Independent:

The White House came down on the director of the FBI on Friday after he testified there has been no evidence of widespread voter fraud in a major election.

In the Trump administration’s latest criticism of Christopher Wray, White House chief of staff Mark Meadows said that the director may change his view if he got involved with the investigation of fraud allegations.

“With all due respect to Director Wray, he has a hard time finding emails in his own FBI let alone figuring out whether there is any kind of voter fraud,” Mr Meadows said during an interview with CBS This Morning.

“This is a very different case,” he added. “The rules are being changed and so what I’m suggesting is, perhaps he can drill down on the investigation that just started, others that we’re seeing in North Carolina and other places where multiple ballots, duplicate ballots, are being sent out. Perhaps he needs to get involved on the ground and he would change his testimony on Capitol Hill.”

This comes after multiple military ballots were found discarded in Pennsylvania. Seven out of nine of those ballots were confirmed to be marked for Trump.

This is a statement that was released from the U.S. Attorney’s Office Middle District of Pennsylvania on Thursday:

The U.S. Attorney’s Office Middle District of Pennsylvania said in a Thursday statement:
On Monday, September 21, 2020, at the request of Luzerne County District Attorney Stefanie Salavantis, the Office of the United States Attorney along with the Federal Bureau of Investigation, Scranton Resident Office, began an inquiry into reports of potential issues with a small number of mail-in ballots at the Luzerne County Board of Elections.

Since Monday, FBI personnel working together with the Pennsylvania State Police have conducted numerous interviews and recovered and reviewed certain physical evidence. Election officials in Luzerne County have been cooperative. At this point we can confirm that a small number of military ballots were discarded. Investigators have recovered nine ballots at this time. Some of those ballots can be attributed to specific voters and some cannot. All nine ballots were cast for presidential candidate Donald Trump.

The U.S. Postal Service officials are now looking into trays of mail that were discovered in a DITCH in Greenville, Wisconsin on Tuesday. The trays were found at 8am near the Appleton International Airport. It has been confirmed by a spokesperson from USPS that the trays did infact have absentee ballots in them.

“The United States Postal Inspection Service immediately began investigating and we reserve further comment on this matter until that is complete,” USPS spokesman Bob Sheehan said.

On Monday, a federal judge ruled that the Postal Service must prioritize election mail.

“The right to vote is too vital a value in our democracy to be left in a state of suspense in the minds of voters weeks before a presidential election, raising doubts as to whether their votes will ultimately be counted,” stated U.S. District Judge Victor Marrero.

“Conflicting, vague, and ambivalent managerial signals could also sow substantial doubt about whether the USPS is up to the task, whether it possesses the institutional will power and commitment to its historical mission, and so to handle the exceptional burden associated with a profoundly critical task in our democratic system, that of collecting and delivering election mail a few weeks from now,” the judge added.

The Justice Department made an announcement Thursday that that DOJ and FBI are presently investigating discarded mail-in votes in Luzerne County, Pennsylvania.

Along with that concert, there were also four people charged with felonies on Thursday in a ballot-harvesting scheme in Texas.

The scheme helped Gregg County Commissioner Shannon Brown win the Democratic primary for his seat by expanding the pool of absentee voters.

The newspaper reported that Mr. Brown thanked God for his victory.

“It is an unfortunate reality that elections can be stolen outright by mail ballot fraud,” Mr. Paxton said in announcing the indictment.

What are your thoughts on this? Let us know in the comments below!