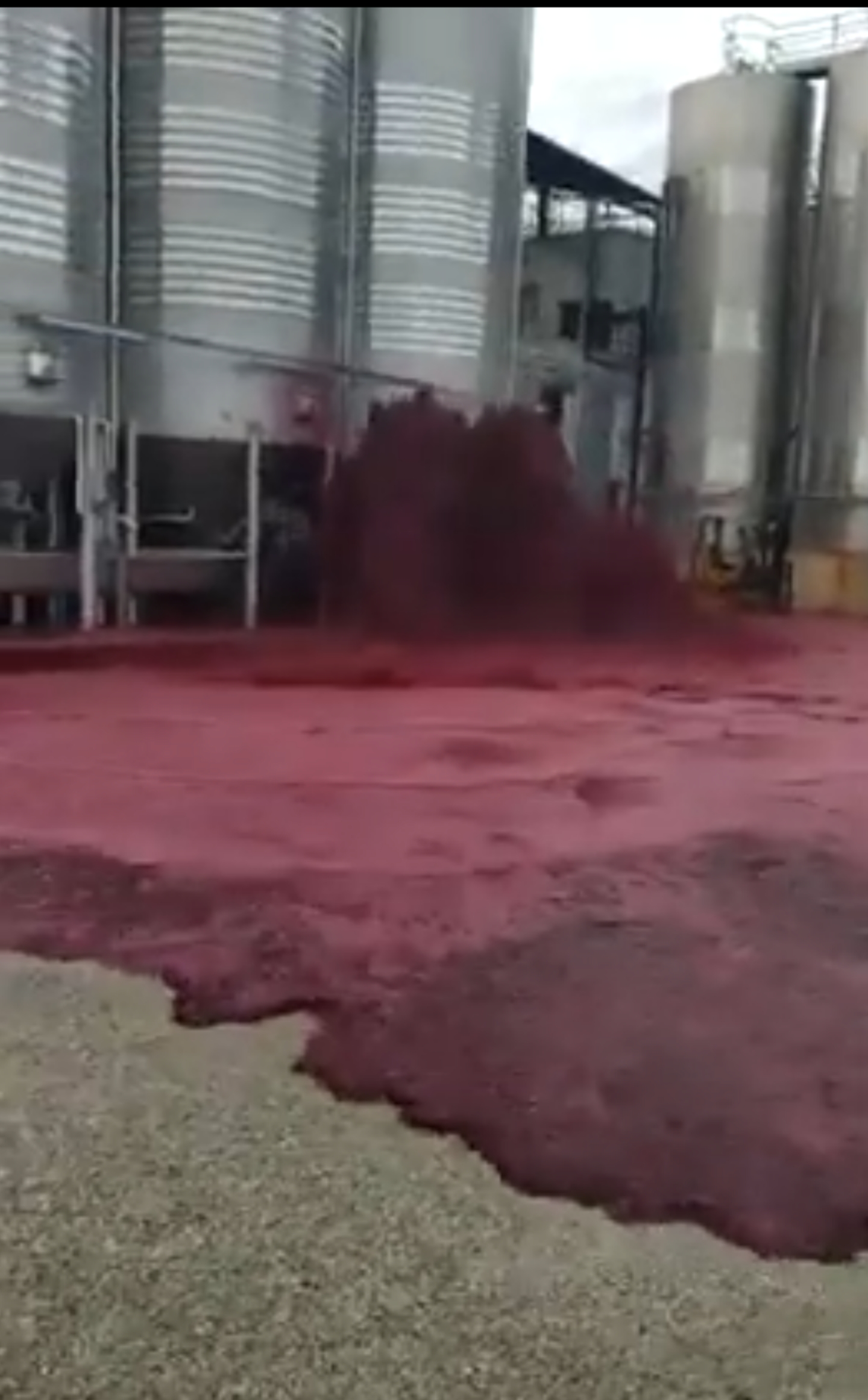 Just wow… this is an epic disaster that is a tragic waste. You could call it the Exxon Valdez for wine enthusiasts everywhere… 50,000 liters of red wine shot 10 feet in the air and spilled on the ground from a winery in Villamalea, Spain about five hours outside of Barcelona. The ground was red as blood after a giant container used to process and store the wine malfunctioned and/or was damaged. It evidently breached somehow. It’s enough to make you weep. The Spaniards must be bereft and inconsolable right about now.

Workers were quick to document the accident and probably to get out of the way as well. You don’t see that every day thank goodness. It was a literal explosion of wine. The spill produced a fast-growing lake of red wine amounting to tens of thousands of bottles of wine. Bystanders filmed the local disaster as they watched in disbelief. Shocked doesn’t cover it here.

Spain became the world’s biggest wine producer in 2013, forcing its vintners to compete abroad in a tough market to sell off the surplus. I don’t think this is what they had in mind. Wineries in Villamalea are in the middle of their harvesting season. That means that workers are busy picking fresh grapes and readying them for primary fermentation. Red wine is normally made from the pulp of red or black grapes, which gives the wine its color.

Scenes of wine spilling over are not entirely new or novel. They’ve happened before. Back in January, a whopping 367,000 liters of cabernet sauvignon spilled into California’s Russian River after a tank leak in a Sonoma County vineyard. There were some very happy fish that day.

Two years ago, a massive, overflowing container of Prosecco created a huge fountain of sparkling wine in the Italian province of Veneto.

The latest spill happened at Vitivinos Wineries, which prides itself on growing grapes in the dry continental climate and in soil rich in clay. “This entire ecosystem is ideal for producing quality grapes for concentrated wines,” the company says on their website. Evidently, their vat system is also ideal for a disaster.

Winery workers could only watch helplessly as thousands of liters of wine slowly drained away under cars and into a nearby field.

Bodegas Vitivinos was founded in 1969, with a production of 6,000,000 kilos of grapes. The production facilities are currently run under the supervision of Dr. José P. Gracia. Perhaps he should do an inspection.

The massive quantity of red wine seen pouring from the tank drew comparisons to the film The Shining from people on Twitter. It is reminiscent of the red rum flood in the movie. Apropos. The breach went on for hours.

This reminds me of the trailer from “The Shining” that was just blood gushing from an elevator and you know what so on track with 2020. https://t.co/7lXZh6LIXe

Who wants to get a big straw and join me? https://t.co/AM8PHyudA5

Somebody needs to put The Shining trailer music on this! https://t.co/GkJ7BTaulY

No, not the wine! That's it 2020. You've taken our lives, our sanity, our dignity, and now you come for the wine? Who has the time machine? It's time to end this now.

The video was originally shared on social media and has been liked almost 38,000 times and has been retweeted more than 9,000 times. Everyone loves a good catastrophe it would seem. This was a very expensive and messy one. It’s one thing to let the wine breathe… it’s another to let this happen. Welcome to the beast that is 2020. More carnage to come no doubt.