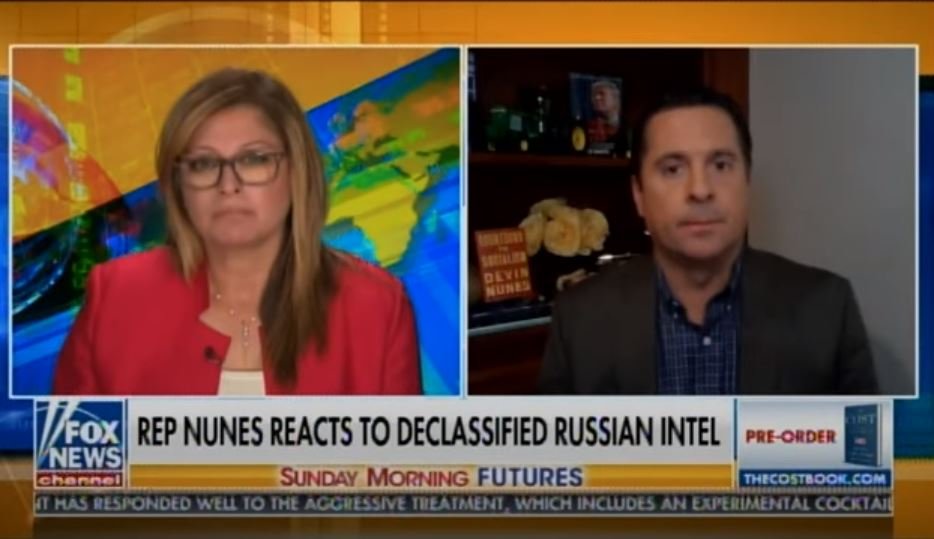 Devin Nunes went onto the Sunday Morning Futures with Maria Bartiromo in an interview that no patriot will soon forget. He spoke on the corrupt FBI, DOJ and other intelligence communitites who used the system as a political platform and lied about Democrat grift with Russia to make the way for the Hillary Clinton supported effort to push the fake Russia collusion stories. LIES!

According to Maria Bartiromo there is more information that implicates Hillary Clinton in the Trump-Russia hoax yet to be released.

Rep. Nunes told Maria Bartiromo that every person in the Group of 8 including Nancy Pelosi knew the information behind the Trump-Russia collusion hoax came from the Democrat party.

Rep. Devin Nunes: The documents that are underlying that we now have seen, I’ve only seen a few of those. They’re definitely smoking guns. That information definitely needs to be made available to the American public. And from what I understand there’s even more underlying evidence that backs up what director Ratcliffe puts out… You have corrupt officials. And I think that’s the point here. Are you going to go back to elect somebody like Biden who just the other night, Maria, had the audacity to go after President Trump for once again, for what? I think he said that he had Putin wrapped around his finger. And then he didn’t answer the question on why did his son get $3.5 million from a Russian oligarch with ties to Putin? If Ivanka Trump had bit a Big Mac in Red Square by a Russian oligarch they would have locked her up and said this is evidence of collusion. Here you have the media which is the propaganda arm of the Democratic Party ignoring all of this! Ignoring all of this for the last four years. And now you have from a debate stage you have, “Why did your son get paid $3.5 million from a Russian oligarch?” So here you have them blaming Republicans this whole damn time for having something to do with Russia when THEY have something to do with Russia! I think they believe it is OK for them to take all this money and grift. And they’ll just take it and accuse Republicans of doing it to cover up their tracks… And now we know the Clinton Campaign created all of this because they knew the 33,000 emails were out there… So what did they do? They created a sick fantasy… Every Republican should be saying, “This is over! We want every damn bit of evidence every intelligence agency has. Or it’s maybe time to shut those agencies down. Because at the end of the day our liberties are more important than anything else we have in this country and they have been stampeded over by these dirty cops and the Democratic Party and the media who fails to report on it.

You’ve got to watch the entire interview, it will give you the patriotic goosebumps. Rep Devin Nunes leaves no rock unturned or question unanswered when it comes to the corruption within these systems.

Share this video, get it out to as many people as you can, Americans needs to hear this.