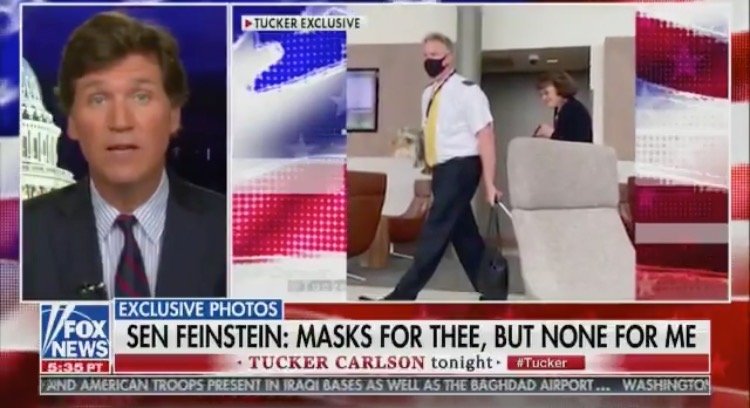 Tucker Carlson of Fox News aired photos on his Monday night show. The pictures allegedly showed Senator Dianne Feinstein walking through an airport without wearing a mask. Carlson highlighted this moment noting that after she wrote a letter to the Federal Aviation Administration with a demand. She demanded that all airport and airline employees and passengers wear masks.

Yes, she demanded a mandatory mask mandate and yet…she was soon after caught wearing NO mask while walking through the airport!

Carlson showed a news report from June and in it a reporter states:

“More and more lawmakers are calling for nationwide rule on wearing face coverings. Senator Dianne Feinstein has written to federal agencies asking for a mandatory mask policy both in the air and on public transit.”

Feinstein’s letter to the FAA below:

I write to urge you to implement a mandatory mask policy for all airport and airline employees and passengers as cases of coronavirus continue to surge. I ask that you issue guidance as soon as possible so passengers can have a clear understanding of the requirements and so that we may reduce exposure for workers and travelers alike.

The Centers for Disease Control and Prevention recommend a comprehensive strategy to protect oneself from exposure to coronavirus while traveling on public transit, including the use of a mask, since social distancing is oftentimes not manageable on a crowded bus, train, or plane. As the research regarding mask effectiveness continues to evolve, the World Health Organization (WHO) updated its guidance on June 5th to specifically cite public transportation as an important part of these guidelines. Organizations, such as the Airports Council International, have said publicly that they would welcome such rules.

While some transit agencies and airlines have implemented mandatory mask guidance for the public, reports indicate that the patchwork of rules have only sowed confusion among passengers. Therefore, I ask that you issue clear, nationwide, mandatory mask requirements for all aviation employees and travelers.

“Well, given that, today, this show exclusively obtained photographs of — and this going to rock your world — Dianne Feinstein in a private terminal at Dulles airport, an FBO as they say in private aviation, on Friday,” Carlson said. “In the photographs, Feinstein can be seen smiling without a mask on.”

Tucker Carlson showed photos of Democrat Senator Dianne Feinstein in an airport not wearing a mask after she wrote a letter to the FAA calling for a mandatory mask policy on airlines. Do as they say, not as they do. pic.twitter.com/TMYTliv93Z

It was noted that the photo had “a pilot with a mask” who was “walking in front of her carrying a bag and a dog.”

Carlson said that he had reached out to Feinstein’s office but they were silent in responding to the incident.

This incident is reminicent of House Speaker Nancy Pelosi and her no mask scandal inside of a hair salon:

“In security footage obtained by Fox News, and timestamped Monday at 3:08 p.m. Pacific Time, the California powerhouse is seen walking through ESalonSF in San Francisco with wet hair, and without a mask over her mouth or nose,” the report said. “The stylist doing her hair can be seen following her wearing a black face mask. Salons in San Francisco had been closed since March and were only notified they could reopen on Sept. 1 for outdoor hairstyling services only.”

These people who have used fear to persuade others that masks are vital, seem to have their fears subside when they think no one is looking and all the sudden masks are not important at all?

Woman’s obituary: In lieu of flowers ‘do not vote for Trump’
October 30th, 2020 Liberty Unyielding