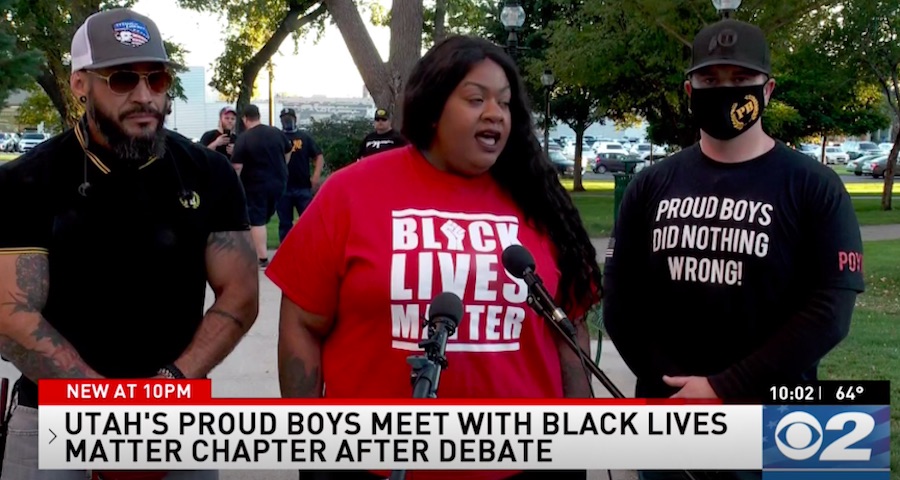 Have you noticed that all the talk about “Proud Boys” has gone silent?

That’s because mainstream media has probably realized that there was never a story there to begin with. At none that would support the narrative they sold their souls to spread through their news reporting.

The Proud Boys and BLM have spoken to eachother and the record has been set straight…but you don’t see mainstream media doing anything to correct on their national level. Just like them to be snakes…

The leader of Black Lives Matter of Northern Utah is Jacarri Kelley, and she is in a video clearing the air about ‘Proud Boys’ …they are NOT racist, not even a little bit and in fact she believes they have a lot more in common then not.

Weird how this wasn't talked about much, isn't it?https://t.co/YBRLpoKFRl pic.twitter.com/riw0apx5nQ

In the video, Kelley along with a couple of members of the Salt Lake chapter of the Proud Boys is holding a press conference that she called herself “because of what happened during the presidential debate last night.”

“When I seen it and heard the words ‘Proud Boys,’ that scared me to death because I am a Black Lives Matter leader and I’ve been working with these Proud Boys to know who they truly are,” she explained.

Kelley said she did not know much about the group and had been hearing about them in the activist community. After hearing that they were white supremacists, she said she had a conversation with some of the members about their purpose at a protest in Cottonwood Heights.

She said that she was confused after receiving a picture of one of the members whom she referred to as Thad, who is a man of color- and is identified as the groups chief.

“We are in no way, shape or form white supremacists,” Thad would tell KUTV.

After reaching out to the local group, the Black Lives Matter leader said she sat down with them and they began having a meeting of the minds.

“We came to realize that we had more in common than not, and in order to combat evil and racism and hatred in this country we do need to be able to reach across the aisle and have these tough conversations that everybody is scared to have,” Kelley said.

“I learned that they’re not white supremacists,” she said. “These are proud American men.”

While theBlack Lives Matter movement has many flaws, the first of which being the unchecked violence the group routinely resorts to, the of unity was an encouraging sign — even if it doesn’t fit the media’s agenda.

Of course as always, everyone had their two cents to share on their social media accounts, here is some of what was found on Twitter:

If this lady is serious then she needs to distance herself from the Black Lives Matter movement.

And do you notice, she is just speaking. Not screaming. Not being irrational. Not saying, "they're great, but……"

Biden (Soros) is angry, they're not listening. pic.twitter.com/gFNtt1XNsv

Show how much msm is pushing false narratives to keep the fires of division stoked !

Show how much msm is pushing false narratives to keep the fires of division stoked !

BLM activists trying to sound reasonable when they act against the mission statement of their cause feels really disingenuous to me. Both groups, by their own core values, are (or should be) opposed to one another. And no, not the race narrative. The rest of it.

You will not hear much about this because it does not fit the lefts agenda.

Yup because it is not the decisive narrative that the leftist media wants everyone to believe.

I'm sure BLM will denounce her. she's speaking too much common sense.

This meeting is a good thing.

It takes MSM out of the conversation. The basic BLM effort has been hijacked and the Proud Boys have been wrongly labeled “White Supremacist”. In the best case scenario, it will be patriotic and concerned Americans talking to one another that will bring about positive change while protecting individual rights.