Hikers walking through a world famous beauty spot in the Great Smoky Mountains National Park experienced their biggest waking nightmare when they discovered a bear feasting on human remains near a campsite.

The human remains belonged to Patrick Madura, 43. They weren’t certain if he died from the attack or something prior to the bear encounter according to National Park Service spokeswoman Jamie Sanders. 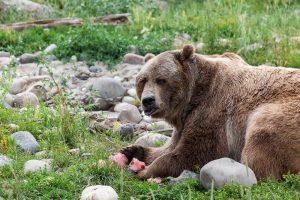 Backpackers were hiking along the Hazel Creek Trail and came upon an unoccupied tent at campsite 82, Sanders said in a statement. Madura’s remains were found nearby. When they saw a nearby bear “scavenging” the area they immediately left the area to get a cellular signal and call authorities.

Rangers responding to the call euthanized a bear that was “actively scavenging on the remains,” Sanders said. Rangers scrambled to the scene just after midnight on Friday where they found the bear eating the remains of a man.

In an interview, Sanders said the bear was euthanized because bears that have scavenged on humans may pose a serious risk of doing it again. The spokeswoman said that they never want bears to associate people with food. Portions of the trail near the incident will remain closed until further notice, Sanders said.

While it wasn’t immediately clear if Madura was camping by himself, it’s important to note that most bear attacks are only in groups of two persons or less.

Bear attacks in North America are very rare although this attack in North Carolina turns out to be the 4th since July. Brown bear incidents have occurred in their native range spanning Alaska, Northern and Western Canada, and portions of the Rocky Mountains in the United States. The locations of black bear wilderness fatal attacks reflect their wider range. Bear attacks are for predatory, territorial, or protective reasons.

LIST of North American Bear Attacks so far for 2020

Stephanie Blais, 44, female was attacked by Black Bear on August 20, 2020 in Buffalo Narrows, Saskatchewan. Stephanie was communicating with her father from a satellite phone while camping with her two children and husband at a family cabin on McKie Lake when a bear took her life. Her husband, Curtis was inside the cabin’s kitchen thirty metres away. The investigation showed the attack was unprovoked and predatory in nature. Curtis subsequently sprayed the bear with pepper spray, but the bear became more furious. He grabbed a gun and shot it twice before it fell to the ground.

Daniel Schilling, 46, male was attacked by Brown Bear on July 29, 2020 in Hope, Alaska. Man killed while clearing a path several miles behind his cabin. An empty can of bear spray was found at the scene. There were no witnesses of the attack.

Peter Franczak, 67, male was attacked by Black Bear on July 20, 2020 in Red Lake, Ontario. Franczak went blueberry picking in the morning and did not return. The OPP went to search for him and found his remains along with a black bear in the vicinity. Postmortem examination later attributed Franczak’s death to bear attack. The bear was killed by police when they arrived at the scene.