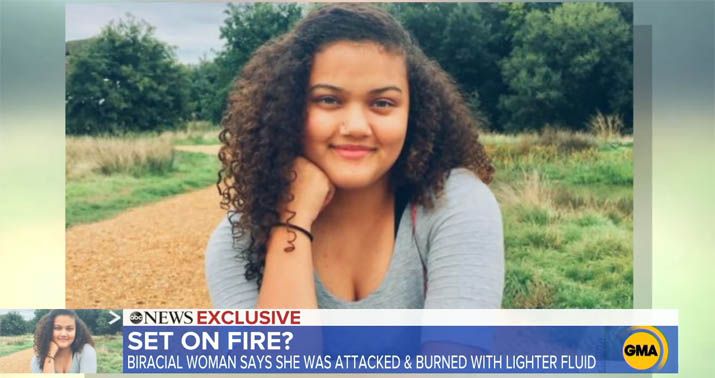 Althea Bernstein an 18-year old biracial woman, reported an alleged attack that she claimed happened back in June in Madison, Wisonsin. Her claim was that four white men who to her appeared to be frat boys, attacked her and this is how she described the attack in an interview:

“I was listening to some music at a stoplight and then all of a sudden I heard someone yell the N-word really loud,” she said in an interview Wednesday. “I turned my head to look and somebody’s throwing lighter fluid on me. And then they threw a lighter at me, and my neck caught on fire and I tried to put it out, but I brushed it up onto my face. I got it out and then I just blasted through the red light … I just felt like I needed to get away. So I drove through the red light and just kept driving until I got to my brother and Middleton.”…

“At first I didn’t even believe what had happened,” she said. I grew up in Madison, on the East side, and my dad would take me to the Farmer’s Market every weekend, on those same streets. It just felt so weird to have these really happy memories there, and then now to have this memory that sort of ruined all of the childhood memories. I never really knew someone could hate you just by looking at you. They didn’t know me. I didn’t know them. I was just driving my car and minding my own business.”

The floral shirt that she gave in her details of the incident was significant because it was gave a possible reference to the “Boogaloo boys”. They are a known group of right-wing extremists who have been showing up at some of the protests dressed in Hawaiian shirts.

After the alleged incident Bernstein said she went home then drove herself to the hospital where she got treated for burns to her face. She proceeded afterwards to file a police report that got the investigation started by both the police and the FBI. It was two days after the “incident” that Bernstein was featured on Good Morning America. Her case started to get a lot of attention and then….

She got a call from Meghan Markle and her story then also got picked up by Rep. Ilhan Omar.

She was attacked with lighter fluid and fire.

These injustices must end.
https://t.co/ZPMu2AcHSn

Berstein found herself the center of attention with some big names that wanted her story because it supported their own narrative. This “suspected” hate crime was the perfect storm for the left’s agenda.

Then it all just stopped, for the next few months no one heard nothing of this unsolved racist hate crime case.

Now, Madison police have come forward to make an announcement. The investigation is being closed. They could not confirm any details of the report she gave on what happened that night, and on top of that there is evidence that nothing like what she had described had ever happened.

According to reports this is what they found:

An exhaustive search of video from city- and privately owned surveillance cameras, however, turned up no evidence of the attack, and the investigation identified a number inconsistencies in Bernstein’s story…

A review of 17 city cameras in the Downtown area from 12:15 a.m. to 1:15 a.m. found no groups of white males matching Bernstein’s descriptions.

Police also did not find any fire damage in the Elantra, according to police reports, and a dog trained to sniff out accelerants did not find evidence of them of in the car.

A forensic analysis of the shirt she reported wearing at the time of the attack did turn up evidence of a “medium petroleum distillate,” such as charcoal lighter, some paint thinners or an organic solvent, according to the police investigation. But no such evidence was found on the shorts she was reportedly wearing at the time, nor on swabs taken of the vehicle.

The police investigation also found evidence that Bernstein had her window rolled up at the time of the alleged attack and hadn’t stopped at stoplights where it might have occurred. It also determined she had been driving in a different lane than she told police and was uncertain about where exactly the incident occurred.

Police were able to put together a detailed timeline of Bernstein’s travels that night showing nearly every intersection she passed through. The timeline they assembled notes that her first mention of an attack happened at 1:24 am while she was at home. A little more than an hour later she went to the hospital and was treated for burns on her face and neck.

Berstein’s family has since released a statement:

“Althea Bernstein and her family appreciate the detailed investigative efforts by all involved in this case. Althea’s injuries are healing and the support of our community has been invaluable in that regard. We continue to maintain our family privacy and will not be granting interviews at this time.”

Here’s the GMA interview with Bernstein that took place when eveyrthing about her case was starting to blow up and get a lot of attention: