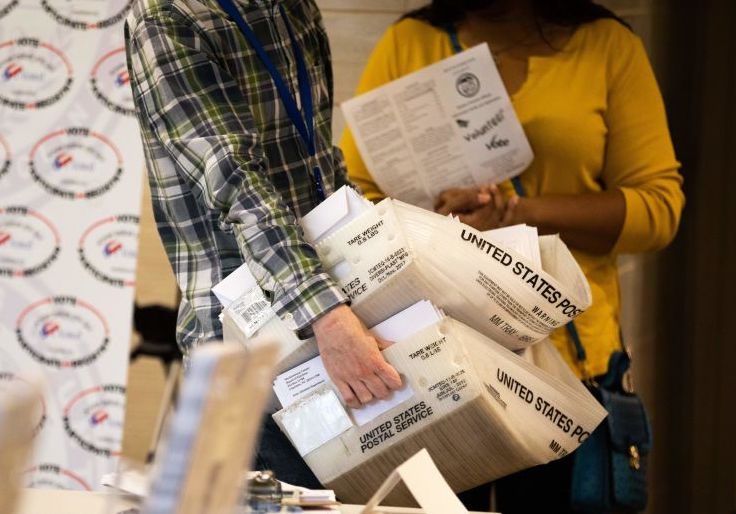 A county near Baltimore has put out a warning to Americans. They have reason to believe that there is someone or even a group of people that are reportedly going around and ILLEGALLY trying to collect Presidential General Election Ballots.

“Should anyone come to you and tell you they would be glad to take your ballot to the nearest Official Drop Box please know they are not working for any local board of election offices. DO NOT GIVE A STRANGER YOUR BALLOT TO TURN IN FOR YOU,” the statement continued. “Contact the Anne Arundel County Board of Election right away. Our direct contact number is 410-222-6600. Should you need assistance to drop your ballot off at one of the Official Drop Boxes, ask a trusted family member to take you to one of the 32 locations in Anne Arundel County.”

In other reports of voter fraud Project Veritas’ exposed a cash for ballot fraud ring in Minnesota that had alleged connections to Rep. Ilhan Omar. Now a legal case has just been filed in Texas again with accusations of Democratic ballot harvesting.

The case alleges that ballot harvesting is going on in Harris County and that Democrats including Dallas Jones who is Joe Biden’s Political Director there, are involved.

Affidavits have been filed by a retired Houston police captain, Mark Aguirre and Charles Marler who is a former FBI agent. Both of whom claim to have video evidence, documented evidence, and witnesses as proof of illegal ballot harvesting going on. The affidavits desribe that there was hoarding of “mail-in and absentee ballots” and having operatives fill them out for people illegally, “including dead people, homeless people, and nursing home residents.”

Both of these men are currently private investigators.

The affidavits claim that ballot harvesters have been exploiting the elderly with the help of nursing home staff.

I have in my possession video-taped interviews of witnesses attesting to the aforementioned people having groups of people completing thousands of absentee and mail-in ballots, including completing ballots for deceased individuals; illegally going into nursing homes, with the complicity of the nursing home staff, and filling out and forging the signatures of nursing home residents; signing up homeless individuals to vote using the ballot harvester’s address then completing the ballot and forging the homeless individual’s signature.

It was also alleged that there are people in the County Clerk’s office that are also involved in the fraud scheme, and that former Harris County Clerk, Diane Troutman, residned citing health reasons, rather than being involved and possibly face prosectutions.

State Senator Borris Miles and Harris County Commissioner Rodney Ellis are two others who are alleged to be involved in the fraud scheme. Both men have denied the accusations and Miles claims the allegations are nothing but “Republican opposition work.”

In the news lately there have been several incidents involving voter fraud. Currently, Minneapolis Police Department is investigating the evidence given by Project Veritas tying Rep. Ilhan Omar to illegal cash-for-ballot harvesting before the election.

“The Minneapolis Police Department is aware of the allegations of vote harvesting. We are in the process of looking into the validity of those statements,” a department statement read on Monday. “No further information is available at this time on this.”

If you haven’t watched the latest Project Veritas video you need to:

Since the story has broke it has caught the attention of many. President Trump has already come out and said that the Justice Department will be investigating the claims made, including the allegation of a cash-for-ballot scheme.

“This is totally illegal,” Trump said Sunday, linking to an article on the issue. “Hope that the U.S. Attorney in Minnesota has this, and other of her many misdeeds, under serious review??? If not, why not??? We will win Minnesota because of her, and law enforcement. Saved Minneapolis & Iron O Range!”